Nearly 3,700 Twin Cities homeowners have entered the federal program to modify at-risk home mortgages in the past three months, keeping the Minneapolis/St. Paul metropolitan area among the most active in the country, according to the latest U.S. Department of the Treasury statistics (PDF).

With a total of 15,313 Twin Cities mortgages in the Homes Affordable Modification Program (HAMP) at the end of February, the metro area is virtually tied with Sacramento, Calif., as the 15th most active area in the country. That figure represents 1.5 percent of the total loan modifications nationwide.

While still high, the Twin Cities’ rank slipped slightly from the No. 13 position it held at the end of November.

The vast majority of loan modifications statewide through February are in the metro area, with 464 in the Duluth/Superior area and 398 in the St. Cloud market. Minnesota ranks 18th among the states, the same rank it held at the end of November. Since then, the state number has increased by more than 4,500, bringing the state total to 18,728.

Among Upper Midwest states, Illinois and Michigan have seen much higher numbers of mortgage modifications, driven by Chicago (No. 3) with more than 51,000 and Detroit (No. 10) with more than 21,000, according to the Treasury. 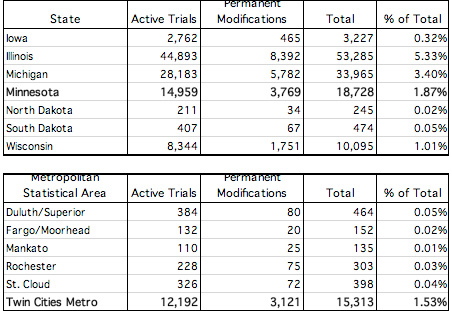 Launched in February 2009, the program has been criticized for getting off to a slow start. Homeowners can seek modification of an existing mortgage in a two-step process. If approved, they receive relief under a trial modification before being granted a permanent modification. The modification can take the form of extending the term of the loan, lowering interest rates or, in some cases, lowering the principal amount owed.

The Obama Administration has set a goal of getting as many as 4 million homeowners into the program by 2012. As of the end of February, permanent modifications have been granted to 170,000 homeowners and an additional 91,800 permanent modifications have been approved by servicers and are pending only borrower acceptance, according to the Treasury Department. Three months ago, only 31,000 loans had been permanently modified.