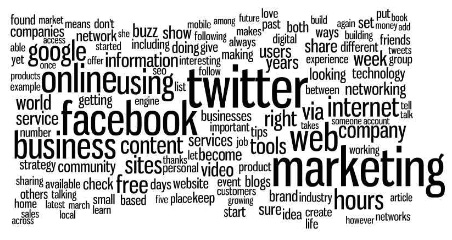 The word cloud you see above shows us how far we still have to go in understanding social media and how to use it.

It’s as if people in the early days of the automobile were talking only about engines and tires, rather than about the impact of mobility, the rise of sprawl and the death of passenger railroads and small towns.

But, of course, nobody had foreseen those things in the early days of the automobile. In similar fashion, I don’t think we should beat ourselves up for not having yet figured out the long-term impact of social media.

However, social media are likely to dominate our communication with one another in the very near future. Increasingly, we expect to be able to react with media — to comment, forward, rate, respond in some immediate way.

Seeking connections
Intense engagement is the norm. Walk down any street, look around you at any sporting event, and half the people at any given moment will be engaged with their cell phone screens. It’s reached the point that we need public awareness campaigns to discourage us from using social media while driving our cars!

Marketers are seeking to connect with consumers and benefit from that intense engagement in social media. In the old days, a consumer connection might have been created by offering a prize for sending in a few box tops. Today, the connection is more likely to be organized around content — offering the consumer access to content that will entertain or inform, while layering ads or marketing messages onto the content. More sophisticated marketers won’t even layer on the ads — the brand will be embedded into the DNA of the content.

The growth of the Internet and the rapid rise of social media are fundamental disruptors on par with the development of the telegraph, the automobile and other life-altering technologies of recent history.

As Rob Key points out, we haven’t yet figured out all the possibilities of this amazing new web of connective tissue. But discovering them is going to be a lot of fun.