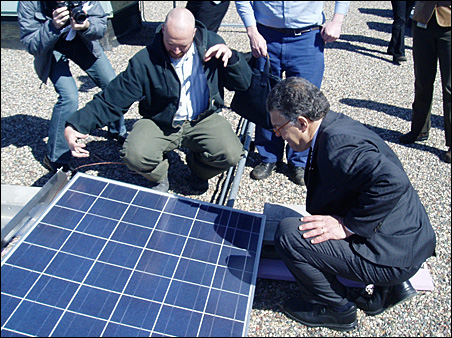 Pat Mulroy said he’s doing it “for the grandkids,” when asked why he decided to have 174 solar panels installed on the roof of his Nicollet Avenue body shop in South Minneapolis, a business that’s been in the family for 50 years.

Minnesota’s U.S. Sen. Al Franken had a slightly longer time horizon in mind as he joked with the proprietor, asking him if Mulroy’s Body Shop will be around for 2 billion years, or “as long as the sun is still shining.”  Franken visited the body shop Wednesday to highlight the use of federal stimulus funds in creating jobs and boosting the alternative energy economy.

Minneapolis-based Solarflow Energy installed the system and is leasing the equipment to Mulroy’s under contract with Xcel Energy. The lease agreement also includes installation, maintenance and support. The federal stimulus funds deliver a grant-in-lieu of a 30 percent tax credit on the value of the installation to Solarflow, Franken pointed out.

While unwilling to specify the amount of stimulus funding he is receiving, Solarflow Energy CEO and founder Gerardo Ruiz said the system installed at Mulroy’s would cost about $300,000 to purchase.

The system will produce up to 40 kilowatts of electricity, or about 30 percent of Mulroy’s electrical requirements. The system can produce up to 50,000 kilowatt hours a year, depending on how much sunlight is available. Excess electricity produced when the body shop is not using power will be returned to the Xcel Energy grid and used by other customers, Ruiz explained.

“This is our first commercial install, and it’s pretty exciting because… it’s the largest one we’ve done so far,” Ruiz said. 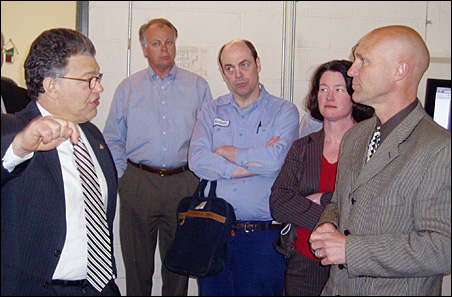 Ruiz worked as a supplier to the electric utility industry before founding Solarflow in 2008. The start-up was partially funded through an Xcel Energy Renewable Development Fund grant of $1.5 million. With six full-time and eight part-time employees, the company has installed six residential solar-powered generating units for Xcel and has plans to install equipment at 25 to 30 residential and commercial sites in the metro area this year.

Ruiz, who was born in Spain, has lived in Minnesota for three decades and hopes to accelerate the awareness and adoption of clean energy in the United States, which lags behind such countries as his homeland in the use of solar energy, he said. “We are truly where the IBM PC was in 1985,” he observed.

After the system’s benefits and funding were discussed in the body shop, Franken and a couple of dozen guests and onlookers headed to the roof to inspect the 5-foot-by-3-foot solar panels. A battery-powered hydraulic lift carried the senator to the roof, but as if scripted to highlight the unreliability of traditional energy sources, the battery died once he had ascended. After the rooftop inspection tour, the senator gamely descended the old-fashioned way, by ladder.