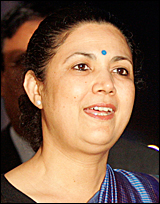 India has set an aggressive goal of growing its economy 8 to 10 percent annually “for the next several decades” according to Meera Shankar, the Indian ambassador to the United States.

On a recent visit to Minnesota, she outlined a trillion dollars of investment the country will make over the next decade in transportation, communications, power generation, health care, agriculture and education infrastructure.

Calling it “a tremendous opportunity,” the ambassador invited Minnesota companies to “become more active” and participate in the segments where they have expertise.

Speaking before the Economics Club of Minnesota last week, the ambassador was in town at the invitation of first lady Mary Pawlenty, whom she met in 2007 when Gov. Tim Pawlenty and his wife participated in a trade mission to India.

Although the Indian economy has slowed, it has continued to grow through the recent global economic slump, unlike much of the rest of the world.

Ambassador Shankar cited quick and decisive action by the government to both stimulate domestic economic activity and provide a safety net for the country’s poor that enabled the country to fare better than most. (Many observers have also cited India’s conservative banking regulations, which insulated it from the worst effects of the financial market meltdown as another factor.)

Because the economy is growing from such a low base, the nation’s long-term growth goal of 8 to 10 percent is achievable, she said.

India is one of the four BRIC countries (Brazil, India, China and Russia) that were viewed as the largest emerging-market opportunities before the recent recession. While China’s explosive economic growth has been export-driven, India’s growth is primarily consumer-driven. Russia’s growth has reversed, and Brazil’s has stalled.

Unlike in China, the engine driving India’s growth is found in its huge middle class. Observers variously estimate the size of the Indian middle class to be 170 million to 250 million, but there is no disputing that it is huge and growing. To illustrate the growth of domestic consumption, and the need for continued infrastructure investment, she pointed out that 15 million cell phone users are added to India’s telephone network every month.

While the growth of the middle class may be the engine, the current Indian government has stipulated that the benefits of economic growth “need to be inclusive, not just for the well-educated,” Shankar said. She pointed to “social safety net” programs to help the rural poor and the application of technology to deliver education and health care to remote villages via distance learning and remote diagnosis, as examples of how the infrastructure modernization efforts focus on adapting technology to India’s particular needs.

India’s service sector has received much of the credit for the nation’s growth, with outsourcing becoming a major industry. Shankar said this has led some observers to suggest India might “leap frog” traditional economic development paths and move from primarily rural and agricultural-based population to a highly educated and knowledge-based workforce, She  emphasized, however, that India also foresees growth in its manufacturing sector, primarily for domestic consumption.

The ambassador noted that India is the leading manufacturer of small, fuel-efficient automobiles and said the manufacturing of steel, cement, auto parts, chemicals and pharmaceuticals will also be key drivers.

She acknowledged the contributions of Minnesota’s Nobel Prize winner Norman Borlaug, whose “green revolution” helped boost India’s agricultural output to feed the country, but said the agriculture sector needs a second revitalization, this time in infrastructure to process food products.

Although only 16 to 17 percent of GDP is based on agriculture, 50 to 60 percent of the population is still involved in food production. The nation recently adopted what she described as a “massive social safety net” that guarantees 100 days of employment per year to help stabilize the economic lives of the rural poor.

While in Minnesota, the ambassador said she met with executives from Target and Medtronic.