Last year in Minnesota, 455 real estate deals “flipped” — were resold — on the same day as the original sale, a troubling indicator of potential mortgage fraud. The state’s dubious achievement was topped only by foreclosure- and fraud-plagued Florida, which reported 515 same-day flips in 2009.

Both in absolute numbers and as a percentage of all residential real estate transactions, Minnesota ranks No. 2 in the nation in this worrisome indicator, according to a recent FBI report on the topic and a MinnPost analysis of 2009 real estate data.

“Minnesota has been a hot spot” for mortgage fraud the last few years, said Joe Dixon, chief of the fraud and public corruption section in the U.S. Attorney’s Office for Minnesota. Real estate flips, which Dixon acknowledged can occasionally occur for legitimate purposes, also indicate there is “something unusual about the transaction.” 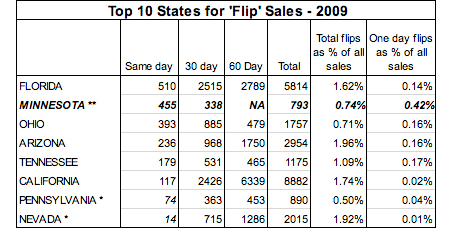 “Flips” occurring within 60 days of an initial sale are still a worrisome fraud indicator, according to the FBI report. They make up 0.74 percent of total transactions here, putting Minnesota sixth in the nation. And that’s likely a conservative estimate since no data were available for the number of flips in Minnesota occurring between days 31 and 60.

More broadly, the FBI’s Mortgage Fraud Report: 2009 Year in Review tagged Minnesota as the 15th most affected in mortgage fraud of all types among all the states and the District of Columbia.

Recently, Minnesota’s U.S. Attorney Todd B. Jones announced that 36 individuals (PDF) have been subjects of federal court actions involving mortgage fraud over the past three months, including recent indictments of five individuals for a different kind of mortgage fraud involving straw buyers and misrepresentations in loan documents.

That announcement and the FBI report were released as part of a coordinated series of announcements from the U.S. Department of Justice and 30 FBI field offices around the country. An interagency Financial Fraud Enforcement Task Force targeting mortgage fraud across the nation is tagged “Operation Stolen Dreams.”

Launched in March, the initiative has led to 485 arrests, more than 330 convictions and nearly $11 million recovered. Losses from a variety of fraud schemes are estimated to exceed $2 billion. The FBI is currently pursuing more than 3,000 cases. 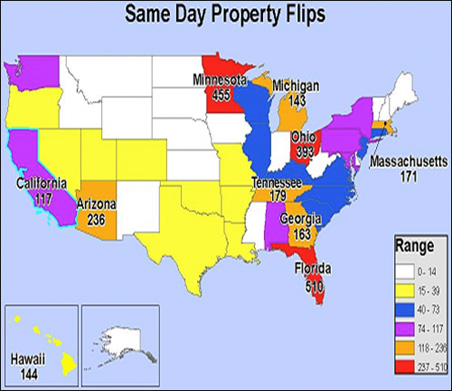 Dixon speculated that Minnesota’s relatively high ranking for mortgage fraud indicators is, in part, a result of the run-up in residential real estate prices over the past several years — “which is not what you think of in the Midwest.”

Dixon also said that Minnesota ranks high in measurements of fraud, in part, because county, state and federal prosecutors have been “on the forefront in prosecuting mortgage fraud.” The U.S. Attorney’s office was one of the first to focus on it in 2007, and the resultant publicity led to additional cases, he said.

“A public recognition that mortgage fraud is a real community problem” resulted in additional complaints and enforcement action, he said. “That’s why it’s getting the attention it is. It literally hits people in their homes.”

Dixon pointed out that a wide variety of fraud cases have been prosecuted recently in Minnesota involving homebuilders, mortgage professionals, real estate agents and buyers.

With several dozen active investigations ongoing, Dixon said mortgage fraud remains “a priority of investigative (and) prosecutorial resources … I expect there will be a significant number of prosecutions brought in the next 12 to 24 months.” 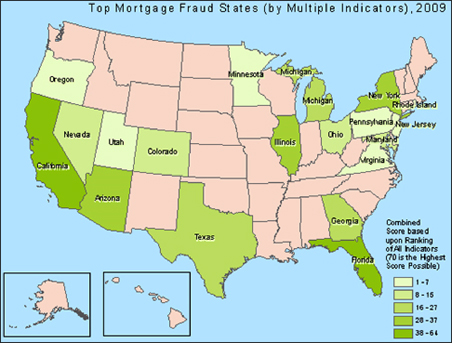