“There is light at the end of the tunnel for commercial real estate in the Twin Cities market,” concludes the University of St. Thomas’ Minnesota Commercial Real Estate Survey (PDF) released today.

Rising rental income and shrinking vacancy rates are positive signals for commercial real estate developers, contributing “to a higher net operating income, which suggests an increase in property values over the next two years,” said Herb Tousley, director of real estate programs at St. Thomas, and one of the survey leaders.

The survey also reported optimism that financing should be easier to obtain, making it more likely commercial projects will get started. Supporting this conclusion, respondents also projected that required returns on investment would fall and degree of financial leverage, or borrowing, would increase. But the optimism is tempered by concerns that land and material costs will rise, limiting overall returns.

Those are the top-line conclusions of the inaugural survey developed by the Shenehon Center for Real Estate at the Opus College of Business, and they offer welcome news for real estate and economic development efforts, which have been in a slump for two years.

The research, conducted by Tousley and Dr. Thomas Hamilton, associate professor of real estate at St. Thomas, is patterned after the UCLA Anderson California Commercial Real Estate Survey, initiated in 2006. The St. Thomas survey will be conducted twice a year, in the spring and fall.

The survey’s composite index was 53.5, indicating some optimism by the participants that general conditions are going to improve slightly over the next two years. Survey participants answered six questions with scores of 0 to 100. A score of more than 50 indicates a positive outlook. 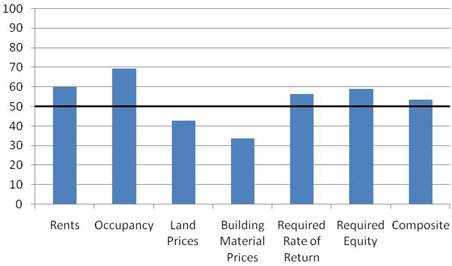 The outlook for rents and occupancy rates scored the highest, indexing at 69.4 and 60.2, respectively.  The index for investors’ expected returns was 56.6 and for the amount of equity required was 59.2. Land values and building costs indexed at 42.9 and 33.7, respectively.

“These numbers indicate that new development could be tempered,” Tousley added. “Though respondents were not predicting boom times ahead, there is an overall consensus that commercial real estate is starting to turn the corner toward better times in the Twin Cities,” he concluded.

The Twin Cities area is experiencing the highest vacancy rates seen in this market in two decades, according to a survey from NorthMarq Capital, a commercial real estate investment and service provider.

Based on 2009 date, overall vacancy rates among the office, retail and industrial property sectors ranged between 15.2 percent and 17.4 percent, including available sublease space, according to NorthMarq, with a total of 4.3 million square feet of “negative absorption,” or vacant space being added in 2009 — 1.8 million square feet of it accounted for by the office market. That is the highest vacancy rate in the Twin Cities market in two decades, according to NorthMarq.

Rental rates have fallen as much as 30 to 40 percent from recent peaks in some cases and more than 80 retail spaces larger than 10,000 square feet are vacant in the Twin Cities, the reported.