Is the iconic “American dream” of a white picket fence in the suburbs being replaced by a solar panel on a downtown loft?

Declaring that “the suburban century is over,” housing researcher John McIlwain predicted that a combination of economic, demographic and regulatory trends over the next decade will create “a new normal” in housing markets across the United States.

Speaking at an Urban Land Institute of Minnesota gathering of real-estate developers and entrepreneurs, local and state officials in Minneapolis last week, he described a difficult near-term and a more hopeful, but changed, long-term picture for the housing market.

McIlwain, a senior fellow at the Urban Land Institutein Washington, D.C., and author of a reaserch paper titled “Housing in America: The Next Decade,” predicted that many central cities will experience strong demand for housing, with the strongest markets “in places that provide a vibrant 24/7 lifestyle.” He also said that shortly after the end of the decade, virtually all new homes will produce most if not all of the energy they use, and the “net-zero-energy” home will be the standard.

As sprawling suburban development comes to an end, home ownership will decline to more historical levels and rental market will grow. People seeking an urban lifestyle but not in a “big city” will look to live in suburban town centers that have emerged around the country. 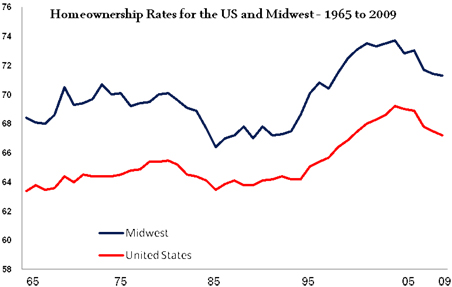 Usually, housing related consumer spending is an important driver in leading the economy out of a recession, McIlwaine said, but not this time. “In the housing market, we have to wait for jobs… This is going to be a long slow recovery” he added, saying that in the next couple of years there is “a lot of bad news ahead of us” in both declining home values and growing foreclosures.

While home values nationwide have declined 25 to 30 percent, “they still have further to fall,” he said, estimating another 10 percent decline before stabilizing in 2011. After that, home values should start to rise in 2012 and beyond, at a more subdued 1 to 2 percent annual rate, assuming unemployment continues to decline.

Currently, 26 percent of homes nationwide are worth less than their outstanding mortgage, or are underwater in real estate parlance. That figure is expected to rise to 40 percent nationwide and the number of home foreclosures will continue to rise as well, he said. Federal efforts to stem the rise of foreclosures are not working as planned, and many homeowners going into those programs are subsequently defaulting on their mortgages, McIlwaine said.

Twenty-six million older baby boomers, the oldest of whom will turn 65 next year, represent an unprecedented senior population in terms of size. The fastest growing age demographic, they are healthy, active and are not retiring as expected. Many of them are moving back into central city areas.

Approximately 58 million younger boomers, aged 46 to 52, are in a more difficult position. Many are still supporting dependent children, tend to live in the suburbs and many of them will be unable to sell their current suburban homes because of the soft market, inhibiting their mobility in the workforce.

Millennials, or Gen Y, the children of boomers, have been particularly hard hit by unemployment recently, which has held back their forming new households. As a result, at 83 million strong, Millenials will be in rental housing far longer than past generations, This generation is very environmentally aware, “the greenest generation,” according to McIlwaine. They are also more urban, and tend to “herding” with peers, further increasing their attraction to urban living.

Finally, the nation’s 40 million immigrants make up 13 percent of all households but represent 80 percent of population growth. They tend to be more comfortable living in multigenerational housing, and as a result, the larger homes in the suburbs are attractive. But many may find housing there too expensive even after the current drop in prices, further boosting rental demand.

McIlwaine also noted that many workers in metropolitan areas, such as teachers, health-care workers, municipal employees and young people, will not be able to afford living  near their work.

The recent recession, precipitated by the financial market meltdown and the bursting of the real estate bubble, slowed the formation of new households. McIlwain estimated that a total of 2 million households “should have been created over the last couple of years,” and said that once new household formation gets back to normal, approximately 1.5 million housing units a year will need to be added.

He urged the audience to rethink zoning, financing and regulatory mechanisms to meet the coming housing demand. “How do we build communities, add value and create housing for our kids?”

Is Minnesota suffering a ‘Ponzi Plague’?

Housing expert predicts: ‘The suburban century is over’