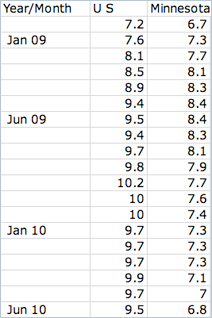 Minnesota’s unemployment rate has fallen to 6.8 percent, the first time since December 2008 that the jobless rate has been below 7 percent, even as Minnesota employers cut 3,700 jobs in June.

The job loss was primarily the result of U.S. Census workers ending temporary employment, according to figures released today by the Minnesota Department of Employment and Economic Development (DEED).

Whilethe state continues to fare better than the nation with its 9.5 percent unemployment rate, Minnesota’s labor force participation rate fell 0.4 percentage points during the month to 72.2 percent. That mirrors a decline in the national rate, which dropped from 65 percent to 64.7 percent. In June nearly 14,000 workers left the state’s labor force.

“Minnesota’s employment picture in June mirrored the nation’s, reflecting the uneven nature of economic recovery,” McElroy said. “Still, Minnesota has gained more than 11,000 jobs in the past 12 months, representing the first year-over-year employment growth in the state since April 2008.” That represents 0.4 percent growth in the past 12 months, compared with a 0.1 percent decline nationally.

Describing a “saw-tooth pattern” to employment numbers, as the economy struggles to emerge from the recession,   Steve Hine, DEED research director, said he hopes the job losses are “a one-month blip” driven by the census worker exit.

Minnesota’s leisure and hospitality industries added 5,100 jobs in June, followed by financial activities, which grew by 2,300 jobs. Those gains, however, were offset by job losses in all other categories. The trade, transportation and utilities sector was down 3,200 jobs, and retail employment fell, consistent with other measures of declining consumer confidence and consumer spending.

Other economic news this week also provided ammunition for “glass half full” or “glass half empty” arguments as the economic recovery sputters along.

Exports of Minnesota manufactured goods climbed 17 percent to $3.9 billion in the first quarter of 2010, up from $3.4 billion the same quarter a year ago. McElroy pointed to export growth as “a sign that the global economy is recovering,” and credits strength in the Asia region in particular, with export sales “jumping 75 percent from a year ago.”

Computers and electronics, the state’s largest export sector, at $924 million in total sales, grew 18 percent from a year ago. And eight out of 10 sectors saws solid growth. But the third-largest category, which includes medical devices, dropped 17 percent to $432 million, primarily because of slumping sales of component parts to Ireland, according to DEED spokesman Monte Hanson.

A quick check of Medtronic and St. Jude Medical’s export sales over the same period showed healthy growth of non-U.S. sales for both companies, but that’s on their global manufacturing base.

Minneapolis-based Ceridian Corp. released its Pulse of Commerce Index, based on diesel fuel purchases by trucking companies, which showed a 1.9 percent decline, erasing most of May’s 3.1 percent gain.

PCI chief economist Ed Leamer, however, said that it is not a harbinger of a double-dip recession because of the late Memorial Day holiday, which affected trucking activity in the first week of June.  The month finished strong, raising hopes for a strong July, according to the Ceridian release.

While the index grew at the annualized rate of 6.2 percent in the second quarter, that was down from 9.7 percent annualized growth in Q1 and 8.5% in Q4 last year. The weakening PCI suggests the economy, measured by Gross Domestic Product, is growing in the 2.5 to 3 percent range, anemic growth that will not drive unemployment down anytime soon.

Outplacement specialist Challenger, Gray and Christmas released numbers that showed planned layoffs nationwide in the tech sector have plummeted 70 percent for the first six months of 2010, compared with the same period a year ago.

From January through June, employers in the computer, electronics and telecommunications industries announced plans to cut 35,375 jobs, down from 118,108, the highest six-month total in seven years, according to the firm. 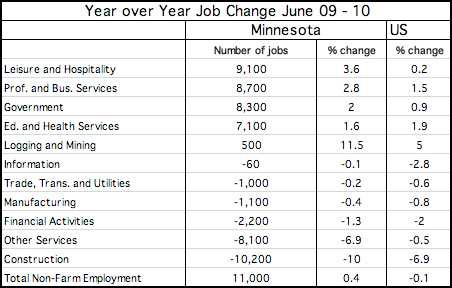