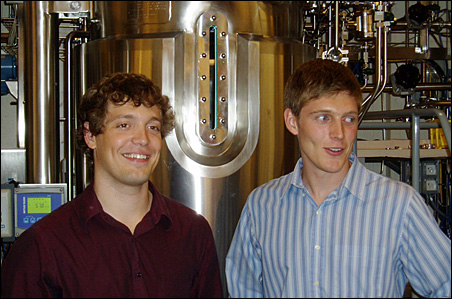 MinnPost photo by Brad Allen
Alex Johansson and Joe Mullenbach stand in front of bio-fermentation tank at the University of Minnesota.

As undergraduates, Joe Mullenbach and Alex Johansson took on a herbicide-eating microbe patented by the University of Minnesota and caught the entrepreneurial bug — in the process turning a class project into a start-up company.

The genesis of the start-up dates to early 2009, when Mullenbach and Johansson took a course on Applied Technology Entrepreneurship at which Sadowsky spoke. He described the research which he and his colleague had conducted that identified a strain of the commonly found arthrobacter bacteria, which has evolved the ability to break down atrazine since its first introduction into the environment in 1959.

Modifying the DNA of the microbe, the researchers were able to increase production of the specific enzyme that initiates bacterial metabolism of atrazine, decomposing it into harmless by-products. The process can result in much lower levels of atrazine than can be achieved with the current treatment with activated carbon. The University holds three patents on the technology.

Mullenbach and Johansson adopted arthrobacter as their class project, developing a business plan for commercializing the technology, and the two kept evolving the idea after the course ended.

Now the start-up is working with two large unnamed Minnesota companies to affix the atrazine- decomposing enzyme onto filters used in municipal water treatment facilities. They hope to have a product on the market by 2012 and “significant sales” the following year.

Joined by the researchers at a press conference unveiling the start-up, Johansson, who graduated last year with a degree in chemistry, said: “We were intrigued when we first heard [Professor Sadowsky’s] presentation. We were able to combine the knowledge we gained in both business and engineering classes to create a commercially viable product that solves a significant public health issue.”

Mullenbach, who also graduated last year with a degree in mechanical engineering, added that the two were launching the company “for the betterment of society… [joining] really great research and a significant problem. We’re happy to make that match.”

“We are excited to see our basic research being developed into a technology that has a lot of potential,” said Wackett. “This technology will allow farmers to continue enjoying the benefits provided by atrazine while ensuring that the chemical isn’t finding its way into water supplies.”

The University has an equity stake in NewWater, the 10th start-up company based on university technology that has been launched over the past 18 months. The two entrepreneurs received help from the university’s Holmes Center for Entrepreneurship in the Carlson School and the Venture Center (part of the Office for Technology Commercialization), which also crafted the license agreement granting NewWater the use of three university patents in return for licensing fees.

In addition, the U will produce the initial supply of enzymes for the company. The company also received grants from the National Institutes of Health and the Small Business Administration. Mullenbach and Johansson said they also have been talking to venture capitalists and angel investors as well.

NewWater was recently named a semifinalist in both the Minnesota Cup, an annual, statewide competition for aspiring entrepreneurs, and the Cleantech Open, a business competition focused on energy, environmental and economic challenges.

The EPA has long required water systems to test and treat for atrazine contamination, and the safety of atrazine has been the subject of much debate among scientists in recent years.

According to the U.S. Environmental Protection Agency, atrazine is currently one of the most widely used agricultural herbicides to control broadleaf and grassy weeds in the United States.  About 70 million pounds of active ingredient are applied annually, primarily in cultivation of corn, sorghum and sugarcane and, to a lesser extent, on residential lawns in the Southeast. Currently, the heaviest uses of atrazine are found in the Midwest.

The Minnesota Department of Agriculture recently completed a review of state guidelines for atrazine use. Last year, the EPA initiated a new scientific evaluation to determine whether current regulations need to be strengthened. They expect to release their findings for peer review this September.