A “very good month” for private-sector job growth offset declines in government jobs, as the state added a net 9,800 jobs in July, the Minnesota Department of Employment and Economic Development (DEED) reported today.

Minnesota’s unemployment rate held steady at 6.8 percent, and June’s job loss was adjusted downward from 3,700 to 800. 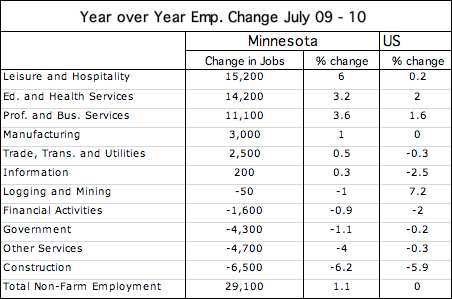 The U.S. unemployment rate was also unchanged in July at 9.5 percent.

“The state has now recovered more than a quarter of the jobs that were lost in the recession,” McElroy said. At the end of July, 202,500 Minnesotans were estimated to be unemployed, down from 250,000 a year ago.

The Minnesota jobs report came against a gloomy backdrop that sent the stock market into a jittery slump early in the day: The index of leading U.S. economic indicators rose less than expected in July, and initial jobless claims increased more than expected.

By contrast, new claims for unemployment in the state fell 24.4 percent from July 2009 and 26.4.percent since the end of last year, while the average work week continues to move up.

Although the payroll tally of jobs provided good news, the unemployment rate — which is based on a survey of households — has not declined as expected.

Assistant Commissioner Steve Hine described the contrary indicators as “a little bit of a mixed message.” He places more confidence in the payroll survey data — with itslarger sample size and better statistical result — that “continues to suggest the state’s recovery is really gathering some momentum.”

Hine pointed to job growth in both the leisure and hospitality and the retail sectors as “very positive developments the last few months.” He said they indicate a possible improvement in consumer confidence and “willingness to spending money,” which he described as a “key ingredient in full blown recovery.”

“The key take-away from the July report is that the economy continues to recover – which is encouraging – but the pace needs to substantially pick up to put people back to work,” said Ed Leamer, chief PCI economist. “With the unemployment rate still at 9.5 percent and consumers understandably nervous about opening their wallets, it is hard to be very optimistic about economic growth. On the other hand, there is nothing about the PCI that is supportive of the pessimistic double-dip view.”

Ceridian, which is positioning the PCI index as a leading economic indicator, pointed to the June PCI, which forecast second-quarter GDP growth of 2.5 percent, closely matching the federal government’s initial Q2 estimate of 2.4 percent growth. The latest PCI results suggest GDP growth of 4 percent in Q3, but only if the momentum continues.

According to Leamer, “The third quarter PCI is starting off strong, but we will need an exceptional August and September to support the current forecast.”

“With the GDP Q2 figure virtually matching the PCI’s earlier projection, it’s become increasingly clear that the PCI is a timely, leading indicator that provides meaningful insight into the current condition of the economy,” said Craig Manson, senior vice president and index expert for Ceridian.

While the index grew at the annualized rate of 6.2 percent in the second quarter, that was down from 9.7 percent annualized growth in Q1 and 8.5 percent in Q4 last year. The weakening PCI suggests the economy, measured by Gross Domestic Product, is growing in the 2.5 to 3 percent range, anemic growth that will not drive unemployment down anytime soon.