Per capita personal income in 2009 fell 3 percent in the Twin Cities metro area and 3.6 percent statewide, both well above the national average of a 1.8 percent decline in major metropolitan areas and a 2.6 percent decline across the nation as a whole, according to a report issued this week by the U.S. Bureau of Economic Analysis (BEA).

The last time per capita personal income actually fell was in 1949 in Minnesota and in 1954 across the United States as a whole, according to BEA data. The personal income drop has contributed to the drag in consumer spending, which makes up nearly two-thirds of the U.S. economy, thereby further slowing any recovery. 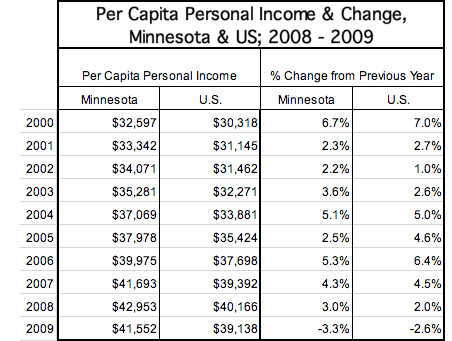 While acknowledging that comparisons between metropolitan areas can be valuable, Neal Young, director of Analysis and Evaluation at the Minnesota Department of Employment and Economic Development (DEED), prefers comparing Minnesota against the country as a whole and looking at changes in personal income by major industry category.

“For the most part, the recession has been across the board in nearly all metro areas, in nearly all industries,” Young said. “We’re doing better [than the nation as a whole] in some industries, worse in others.”

One employment category “really stands out significantly worse than the nation as a whole,” Young said. He pointed to a 19.4 percent drop in income for the nearly 70,000 Minnesota residents who derived income in the category described by BEA statisticians as “management of companies and enterprises.” This compares to a 5.2 percent decline in income among managers nationwide in 2009.

Young noted that if compensation for managers in the Twin Cities metro area had declined at the lower national rate, that would wipe out two-thirds of the gap between the metro’s total income decline and the national average.

Layoffs were not the cause of the decline in manager income, Young said. The number of management employees only dropped by 1.9 percent in 2009, so the majority of the income drop was due to reductions in wages per employee, he added. While Minnesota’s management employees are relatively well paid (averaging more than $100,000 in 2009, according to BEA data), that includes not just salary, but bonuses and contributions to pensions such as  401Ks, which were cut back by many companies in 2009.

Other employment categories in Minnesota, notably construction and wholesale, also saw larger declines in income than the national average. But none were as large as the managerial declines.

“We try not to get terribly riled up about one-year trends,” Young said. “If we continued to see a trend over more than one year, that would be more significant.”

Minnesota’s per capita personal income fell in 2009, the first decline in 60 years