Is your home worth more today than it was three months ago or a year ago?

Home values in the Twin Cities metro area fell 3.1 percent year over year to an average of $185,800, but the decline was flattening out, off only 0.2 percent from the first to second quarter, according to estimates from a national real estate website, Zillow.com.

Home values in the Minneapolis-St. Paul metro have fallen 24.3 percent since their peak in July 2006 and are now back to the level they were at in July 2002, according to Zillow. 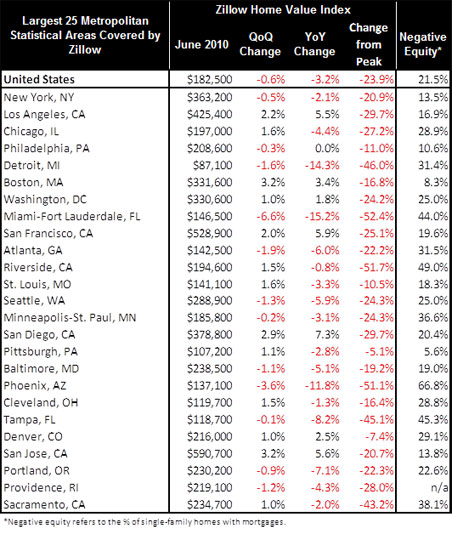 Those estimates compare with a median selling price of $170,000, down 3.4 percent from the previous year based on actual sales data across the metro area for the 12 months from July 2009 to June, according to the Minneapolis Area Association of Realtors.

Month-by-month median sales have been on a decided uptrend since January’s $156,400 figure. June posted a sales price of $183,000, an increase of 10.2 percent, demonstrating the different conclusions that can be drawn based on different measures, time periods and estimating methods.

One reason for the variance is that Zillow does not just measure home value based on recent sales data, which is used by the Realtors’ association. Instead, it estimates the value of all residential properties in major metropolitan regions across the United States, even those that are not for sale. This method, Zillow claims, represents a more accurate picture of value.

Herb Tousley, director of the Shenehon Center for Real Estate at University of St. Thomas, prefers actual data on recent sales as a better gauge of what is happening in the market.

Although average prices are still down more than 20 percent from their peak, he pointed to the Realtors’ reported sales data as one positive sign that the market may be stabilizing. He expects metro area home prices to “bump along the bottom … until the market figures out what the new normal is.”

Not all was gloom-and-doom in the Zillow report, however. More than half of metro area municipalities listed showed rising home values from the first quarter, including such larger communities as Bloomington, Chaska, Chanhassen, Edina, Eden Prairie, Plymouth and St. Louis Park.

More troubling was the Zillow estimate of underwater mortgages.

More than one of every three metro area single-family homes carrying a mortgage was worth less than the outstanding mortgage at the end of June, by Zillow’s reckoning. That gloomy picture actually represents improvement from the first quarter, when Zillow estimated 41.2 percent of metro single-family homes with mortgages had negative equity.

The Twin Cities area stands well above the national average of 21.5 percent of mortgaged single-family homes considered underwater, down from 23.3 percent at the end of Q1.

Why does Zillow’s estimate show such a high percentage of metro single-family homes in a negative equity position?

“It’s an interesting question,” Zillow.com spokesperson Katie Curnutte said. “In a lot of ways, the [Minneapolis-St. Paul] metropolitan area has followed national price trends,” she said, pointing to home values that have fallen about the same from their peak in 2006 (off 24 percent) and year-to-date (about 3 percent) in both the Twin Cities and nationally by Zillow estimates. So other things being equal, negative equity should be similar as well, she acknowledged.

But Minnesota suffered from higher-than-average foreclosure rates through 2008, before passage last year of foreclosure mitigation legislation, which has slowed the rate of foreclosure filings in Minnesota. That may slow the decline in negative equity positions by keeping homes out of foreclosure longer, she said.

Minnesota also ranked high on the FBI’s indicators for possible mortgage fraud last year and has had several high-profile prosecutions for mortgage fraud, which could have inflated prices as well.

Foreclosure rates are driven by employment, rather than homeowners’ calculations of negative equity, St. Thomas’ Tousley said. He expects the employment picture to slowly improve over the next year but, as a result, it could take 12 to 18 months for high rates of foreclosures and negative equity to “wash through the system.”

“Nationally, home values are moving in the right direction as rates of decline continue to slow,” said Zillow Chief Economist Dr. Stan Humphries. “There is a large unknown on the horizon, however, as these second-quarter numbers are still heavily influenced by the federal homebuyer tax credits. … Recent trends in home values suggest the nation could reach a bottom in the latter half of 2010, but we continue to be cautious about the impact of declining home sales.”

Real estate picture still cloudy and gloomy, but the forecast is brightening