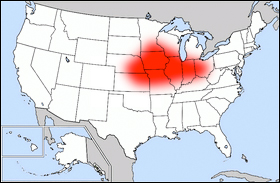 Despite the devastating floods that hit southern Minnesota two weeks ago, the U.S. Department of Agriculture issued revised estimates this morning predicting a record corn and soybean harvest for the state but lower nationwide harvest estimates for both crops.

As the Legislature gets ready to convene to consider flood relief measures, Ron Kelsey, 70, a longtime observer of Minnesota agriculture, remains philosophical: “Farming is always a challenge. It always has been. It always will be.”

I checked in with Kelsey, a retired high school ag teacher from Lamberton whose family has farmed in southern Minnesota for decades, to see how they fared. He lives in town, his sister’s farm in Antrim got hit with hail as well as the flooding rains, beating some of her soybean crop onto the ground —  lost for the year — he said.

Although 92 percent of the corn crop and 88 percent of the soybean crop is mature, according to the USDA, farmers can’t get into flooded fields to harvest. “I’ve never seen water like this in the fall — ever,” the septuagenarian said.  “When you get rain this late, you have to wait until the ground freezes and hope you don’t get snow.”

“It’s been a good growing year. Up to two weeks ago, we were running two weeks ahead” of previous years, said Doug Hartwig, director of the Minnesota field office for the National Agricultural Statistics Service of the USDA.

History on a seed sack
Kelsey is the State Fair’s farm crop superintendent and oversees judging for corn, seed art and the scarecrow contest at the Fair. He is also a historian of Minnesota’s agricultural and social history, as told through canvas seed sacks – yes, seed sacks — those Depression-era cloth bags with colorful labels, many named for family farms throughout the state.

Minnesota farmers who grew and sold seed corn developed at the University of Minnesota starting at the turn of the last century were allowed to put their individual names on the sack, even if they were all selling similar seed. 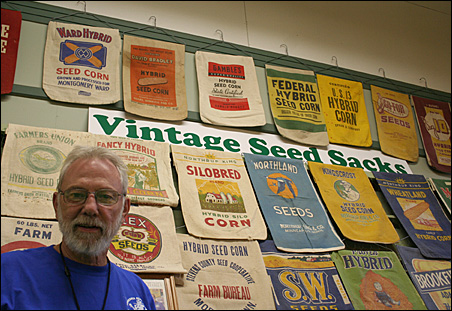 In 1944, 284 state farmers sold Minnesota-developed seed, Kelsey said. A few, including Northrop King Seed Co., also developed their own varieties. But with the growth of a few large seed companies, most independent seed labels went out of business. “Of all sacks I have, only three or four companies are still selling seed,” he said. “All the others went by the wayside.”  said.

Every year Kelsey shows about 200 of the sacks from his collection, and each sack has a story.

Kelsey recounts how one visitor recognized a young girl on a seed bag, the daughter of the farmer whose name was on the bag. “She’d be about 90 years old now,” he observed.

Another admirer of his sacks recognized one farm from his youth and told Kelsey: “Those people had running water in their barn before they had it in their house.”

He’s been known to help families locate a sack that has their family name on the bag.

Having grown up on a farm in Lewisville, Kelsey was familiar with the colorful bags.

The dye in seed sacks was made to wash out overnight, Kelsey explained, so the cloth could be used to make dishtowels and underwear. Flour sacks, on the other hand, were printed with permanent dye, “So women could make dresses out of them.”

The industry moved to paper and plastic in the 1950s, and Kelsey began collecting the cloth relics, picking them up at auctions and barn sales for a couple of bucks a piece. Now the burlap seed sacks typically sell for $10 to $25 on eBay.

Particularly desirable sacks (those with images of American Indians) can go for several hundred dollars apiece, he said. Kelsey occasionally adds to his collection, and keeps his eye out for particular names, on behalf of people who ask him to acquire their family’s name sack.

Before the turn of the last century, Minnesota was thought too far north to be a significant corn producer. “But the U[niversity of Minnesota] pretty much proved them wrong,” Kelsey observed. 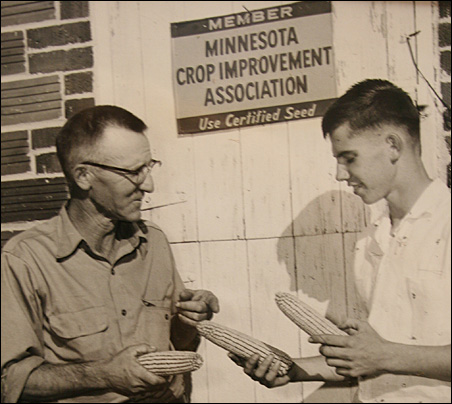 Courtesy of Ron Kelsey
Ron Kelsey, right, and his father, Dale, discuss the finer points of prize-winning corn in the 1950s.

In our northerly latitudes, the morning dew burns off the corn earlier and daylight lasts longer, making for a longer and cooler workday in Minnesota’s fertile lowlands than in states to the south. But earlier winter and later spring mean a shorter growing season. Corn varieties in the 19th  and early 20th centuries did not flower early enough for northern growing.

In 1893, professor Willet Hays at the University of Minnesota selected and developed an early flowering strain which became known as Minnesota 13. It was released in 1896. By the turn of the century, demand outstripped supply, and the expansion of the corn belt into the northern plains was assured.

Today, about one-third of seed corn planted in the United States can be traced back to Minnesota 13, with 45 percent coming from all the strains developed by U of M researchers, according to  Forrest Troyer  and Mark Mikel, agronomists at the University of Illinois.