I’ve always been fascinated by logos. What makes a good one? And how do you capture a company’s essence in a few letters, lines and colors?

In recent years, I noticed a new Cargill logo popping up. I liked it, and thought it was an interesting indication that the reclusive, Wayzata-based giant was making itself more visible to the general public.

So I was delighted to discover that the new identity for the world’s largest private company was created by a small branding firm only a few blocks from my office in the North Loop of downtown Minneapolis. Franke + Fiorella has been in business since 1993, and the eight-person firm has created or freshened logos and corporate identity systems for a host of well-known Twin Cities companies, including Valspar, 3M and Mosaic.

For Craig Franke, the firm’s creative director, the acid test of a good logo is simple: Would you wear it on a shirt or hat?

“It’s like when you meet someone and you connect immediately,” Franke said. “There’s something that connects the emotional and the cerebral.”

Presumably that’s what he felt when he met Deb Fiorella, the firm’s strategic director — and his spouse. Together, the two dissect every aspect of their client companies and distill the findings into logos and identity schemes that may appear on thousands of “touchpoints” from packaging to business cards to TV ads.

In approaching an assignment, Fiorella said, “The goal is to discover who you (the company) want to be. What’s the personality of the brand? Is it bold, sassy, quiet? 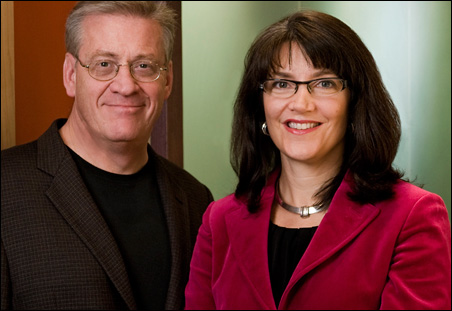 “Brands are relationships,” she said. “The logo triggers an emotional response about everything you know about that brand.”

Gap, the clothing store, discovered that recently when it adopted a new logo. After an outcry from fans on social media, the company hastily reverted back to its old logo.

Other aspects of logo development are more subtle. Colors may have different meanings in different parts of the world, for example — so a logo designed for worldwide use has to be configured in a way that won’t offend audiences in other cultures.

The Cargill logo actually came together pretty quickly, Franke said. Cargill was undergoing a strategic shift from a commodities seller to a business solutions provider. Setting the logo in italics signaled progressiveness, while the stylized leaf was a nod to the company’s old logo and its agricultural heritage. 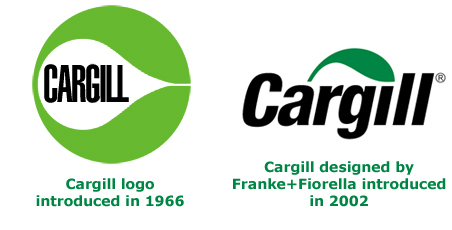 In today’s marketing world, there’s a lot more emphasis on the visual aspects of branding. If you doubt that, consider one word: Apple.

“Look at the iPhone,” Franke said. “It’s beautifully designed. And look at the sales.”

More than 60 million since its 2007 introduction. Design does matter.

Cargill’s new logo: Why it works