“Angry boaters become angry voters,” was how business professor Matthew Slaughter summed up the current pre-election mood to Minnesota business and civic leaders last week. But he wasn’t talking about some DNR snafu in the land of 10,000 lakes.

Instead, Slaughter was turning President John F. Kennedy’s oft-quoted metaphor about the economy — “A rising tide lifts all boats” — on its head.

With an extended period of high unemployment, Slaughter predicted the anti-incumbent mood playing out in the mid-term elections across the country may be a recurring factor for the foreseeable future.

Speaking at the Economic Club of Minnesota, in a talk titled “Can the American Economy Recover from the Great Recession?,” he described how a series of issues from a decade-long decline in real earnings for most workers, stubborn high unemployment, flagging business investment, declining educational achievement and lack of clear leadership have eroded Americans’ confidence in the future.

Slaughter, a 1986 graduate of Minnetonka High School, challenged Minnesota business leaders to break through the bitter political arguments to push for necessary progress on taxation, infrastructure investment, trade policy and education to get the economy growing.

The former member of the Council of Economic Advisors  and current professor of business administration at the Tuck School of Business at Dartmouth College told the lunchtime audience: “If we can’t get the policy choices right… it’s going to affect economic  performance,  not just for our kids and grandkids,  but in the next couple of years as well. The irony is…what’s missing is not the ideas but the leaders willing to recognize and influence that.  Where is that necessary leadership going to come from?”

Acknowledging that uncertainty in health care and energy costs and tax, trade and immigration policy all have contributed to businesses’ reluctance to invest, he told the audience: “To have recovery, we need to get companies like yours aggressively hiring again.” He suggested that business and civic leaders should step into the gap and lead “a serious conversation” about difficult policy choices.

A  decade’s worth of jobs have been lost in the recent downturn., he said, pointing out the current 108 million private-sector payroll jobs  is about the same number as existed in March, 1999. Unemployment plus underemployment (those working part time who seek full-time work) stands at 17.1 percent or 26.4 million nationwide, he said, reflecting “how badly hurt the job market is in America.”

Number of months necessary to restore jobs lost in a recession 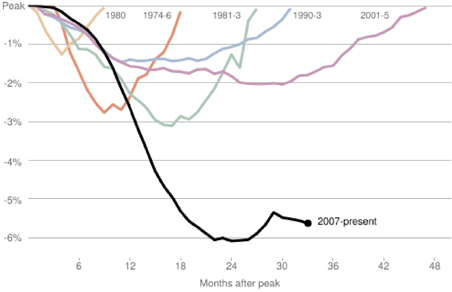 It took 48 months to recover a 2 percent job loss after the previous recession in 2001, Slaughter said, projecting that it will take until January of 2020 to restore the 8.5 million private sector jobs lost.

Starting in the early 1980s, consumer spending increased as a share of the total economy, representing more than 70 percent of GDP before the recent meltdown. The dominance of household spending drove personal savings down, increased investment in residential real estate, drove imports and ballooned trade deficits financed by overseas investors. When the bubble burst, an American financial crisis became a global financial crisis, Slaughter said.

“We need to build back jobs different from the kind of jobs we were growing” before the recession, Slaughter said, as he argued for increasing export-oriented employment. He applauded the Obama administration’s goal of doubling U.S. exports in five years, but said that words are not enough. “It’s hard to reach those goals without concerted leadership to get us there.”

In addition, Slaughter favors loosening trade policies that will encourage foreign companies to invest in the United States. (He pointed out that more than 90,000 Minnesotans work for foreign corporations with operations in the state.) But public opinion and political rhetoric are moving to a more protectionist stance, he said, with opposition to free trade the highest it’s been in over a decade.

Source: Matthew Slaughter, Dartmouth College
2009 real median income for U.S. households was $49,777. This was about equal to the level of 1997.

Lamenting that high school graduation rates have plateaued in the United States over the past 40 years, Slaughter pointed out that among industrialized nations, the U.S. ranks 16th in college-completion rates and 20th in high-school completion rates — a measure that the U.S. perennially topped in previous decades.

At the same time, “skill-upgrading in the rest of the world has gotten faster and faster,” he said, pointing to China, which has more than doubled the number of its universities and increased the university student population  six fold since 1997.

That lagging educational achievement has real economic consequences.  Slaughter pointed out that real earnings have declined for more than 96 percent of the workforce over the past decades as measured by level of educational attainment and adjusted for inflation. Only individuals with doctorate degrees or professional degrees in law, medicine and business have seen their actual earnings rise.

“From the end of World War II to the 1970s there was a period where we had decent growth for the large majority of American workers.” Much of the current popular animosity toward the financial sector in particular reflects this disparity in earnings, he said.

He said the challenges plaguing the economy are not a partisan political problem.  “Frankly, a lot of the issues that make my hair grow gray are American issues. I’d like to think about what the data tells us.”