U.S. manufacturers are not “fully seizing the moment” to capitalize on global market opportunities, and Minnesota lag behind even the national average in export sales, according to an annual survey.

Only 19 percent with international reach reported they were actively involved across the spectrum of global business activity from import and export to offshore production, according to a nationwide survey of 1,061 manufacturers and wholesalers, which included about 100 Minnesota firms and more than two-thirds that were primarily or exclusively manufacturers.

While Minnesota’s export sales jumped to $4.3 billion in the second quarter of 2010, up 19 percent from a year earlier, export sales have not quite reached 2008 levels.

Export Sales as % of total 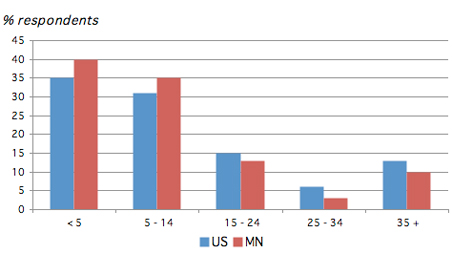 More than 70 percent of respondents to the fifth annual survey look to increasing sales in domestic markets as the key strategy for recovery, despite the sluggish U.S. economy. Forty-six percent of companies nationwide and 44 percent of Minnesota companies look to international sales growth as part of their recovery plan, Woell said.

Brazil, Central America, India and Australia were most often cited as targets for export growth by respondents, Woell said.

Manufacturers across all industry sectors reported improving business conditions.  Twenty-four percent of businesses reported they  are “thriving and growing,” up from less than 10 percent last year, while only one in 10 reported business was “declining,” compared with four in 10  reporting declines last year. This is the first year that the percentage of businesses reporting improved conditions grew, after three years in a row of decreasing positive and increasingly negative responses.

After more than 5.6 million jobs in the manufacturing sector were lost over the past decade, including more than 100,000 in Minnesota, manufacturing employment has started to grow again.

Minnesota gained manufacturing jobs the last four months in a row, though it has not come close to gaining back the losses of the previous decade. Nationwide, the manufacturing sector has added jobs the past two months.

“If I talk to manufacturers around the state, [hiring] engineers has been and continues to be a challenge. This is also true for entry level workers,” Woell said. That’s true, nationally, too.

“When I first saw that, I thought, ‘How can that be? We’ve got 10 percent national unemployment.’ Then I thought back to talking with out-state manufacturers and getting the right workers, even entry-level workers, is a challenge,” he added.

The McGladrey report suggests that companies “partner with appropriate educational resources to help develop a deeper pool of qualified workers.”