The state’s initial claims for unemployment insurance continued to fall last month, according to Minnesota’s Department of Employment and Economic Development (DEED).

New claims in October totaled 31,957, down 18.3 percent from a year ago and essentially flat with September, This is the 10th month over the past 12 where seasonally adjusted initial claims have declined, compared with the same month a year earlier.

“It wasn’t a dramatic move, by any means,” said Steve Hine director of research for DEED. “We at least held steady.”

This continuing decline accompanies positive news this morning showing unemployment numbers across the United States posting the second-strongest job gains all year. The average work week moved up slightly, too.

Private-sector non-farm payroll employment increased by 159,000 in October, well above the average gain of about 95,000 per month so far this year, as the national unemployment rate remained unchanged at 9.6 percent, essentially unchanged since May, the U.S. Bureau of Labor Statistics (BLS) reported today.

Since last December, nonfarm payroll employment has risen by 874,000; the number of unemployed persons, at 14.8 million, was little changed in October. 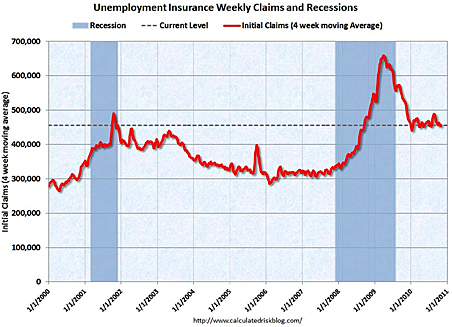 Government employment dipped 8,000 in October. Employment in local government, excluding education, decreased by 14,000 over the month and has fallen by 123,000 over the past 12 months. The number of temporary census workers fell by 5,000 in October, and there were only about 1,000 temporary census workers remaining on federal payrolls, after peaking at 564,000 in May, the BLS reported.

The strong employment figures contrast with a rise in initial jobless claims nationwide last week that raised concerns among some analysts about a stalled jobs outlook.

Nationwide, initial claims rose by 20,000 last week to 457,000, according to the U.S. Department of Labor. This report followed declining initial claims seven out of the eight past weeks and the previous three weeks running.

Dirk van Dijk, chief equity strategist for Zacks.com, observed that the four-week moving average of initial claims seems to be “stuck in a tight trading range,” rising by 2,000 to 456,000 after declining sharply in the second half of 2009.

“We seem to be stuck in a pseudo-recovery. The economy is growing, but not at the sort of rate needed to add a significant number of jobs and to put a dent in the huge army of the unemployed,” he said. “In hindsight, the run-up to 500,000 seems to be mostly a function of the census workers being laid off (they are almost all gone now, and the census was completed quicker and at less cost than anyone had expected).”

Once again, neighboring North Dakota’s metro areas led the nation for the lowest unemployment rate, with Bismarck at 2.8 percent as the top metro area.