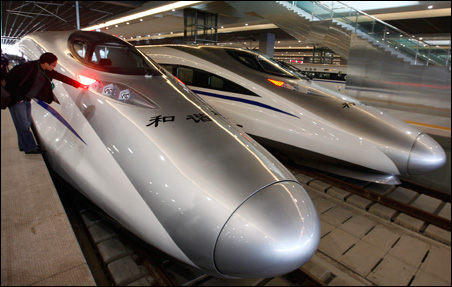 REUTERS/Aly Song
A man looks at the bullet trains serving the new high-speed railway linking Shanghai and Hangzhou in China.

Last month’s elections delivered a serious setback to prospects for faster passenger trains between the Twin Cities and Chicago, but now comes word of a new study touting even a speedier connection between the two metropolitan areas.

The Midwest High Speed Rail Association (MHSRA), a privately-funded rail passenger alliance based in Chicago, is examining a plan that would use “bullet trains” — comparable to those in Europe, Japan and China that exceed 200 miles an hour.

The group has retained one of the world’s leading engineering and architectural firms to study bullet train service linking the Twin Cities and Chicago.

The MHSRA believes that if a single bullet train could come on line in the Midwest, it would demonstrate the popularity of such service and lead the public to push for more of these trains. The Obama administration has given large grants to California and Florida for passenger trains approaching the speeds of bullet trains abroad. However, its grants for speeded-up service in the Midwest are essentially for “Amtrak modernization” that doesn’t envision trains faster than 110 miles an hour.

Even those plans, however, were derailed in recent weeks when Wisconsin’s Gov.-elect Scott Walker rejected an $810 million federal grant that would have built out a key section of the route.

That service, which had been projected to begin by 2016, would clip roughly two hours from the eight-hour-and-twenty-minute journey Amtrak’s Empire Builder now offers between Chicago and St. Paul.

Rick Harnish, director of the association, says AECOM Technology Corp. is examining possible routes to link the two regions. The firm’s study, which will also look at the costs of developing the service, could be done by early next year and followed up with a look at the benefits.

Harnish outlined the study early this month in Minneapolis, in a presentation to a small gathering convened by the University of Minnesota’s Center for Transportation Studies, and in a later interview. His talk was titled “A Train to Chicago in Three Hours — or Less.”

The association’s work on Chicago-Twin Cities bullet train service echoes a similar study it commissioned to examine possible routes, costs and benefits for such service between Chicago and St. Louis. That work was done last year by a Kansas City transportation consulting firm, TranSystems.

The firm found that bullet trains could make the journey from downtown St. Louis to Chicago’s O’Hare International Airport via Champaign-Urbana and downtown Chicago in about two hours. Currently, Amtrak’s passenger trains take about five-and-a-half hours to make the trip between the two downtowns. There is no heavy-rail passenger service now between downtown Chicago and O’Hare.

Huge obstacles vs. offsetting advantages
Enormous challenges would face any serious attempt to turn the dream of bullet trains into a reality in the Midwest.

The most obvious of them is cost, particularly daunting given today’s harsh fiscal climate of opting for spending cuts to get various governments’ fiscal houses in order.

TranSystems estimates the price tag for building a St. Louis-Chicago-O’Hare bullet train infrastructure at $12.6 billion, roughly three times the cost now envisioned by rail planners for increasing the speeds of Chicago-St. Louis trains to up to 110 miles an hour.

Harnish says early indications are that costs for a Chicago-Twin Cities bullet train system — about 400 miles vs. about 300 for St. Louis-Chicago-O’Hare — could reach $25 billion.Up to half of the cost could go for carving out a new passenger rail corridor along tracks that run just west of Amtrak’s existing line between Chicago and Milwaukee.

AECOM has been looking at a route that would parallel Interstate 94 coming from central Wisconsin to St. Paul’s Union Depot, Harnish says. However, complexities involved in getting into the depot from the east could lead the firm to examine other possible routes.

Harnish notes that initial proposals for bullet trains in Japan, France and Spain were dismissed as too costly. But eventually, these countries went on to build the infrastructure needed for such trains, and today they are heavily patronized.

He says that as a step toward eventual Chicago-Twin Cities bullet trains, Amtrak should increase the frequency of its once-a-day Empire Builder service between Chicago and St. Paul.

Harnish argues that soaring gasoline prices ultimately will make auto travel too expensive for many. He adds that passenger trains are much more energy-efficient and less environmentally degrading than auto travel and that hassles with air travel are making that option increasingly problematic.

Given all of this, Harnish concludes, it makes sense to plan now for bullet trains, although they would be many years away from reality.

AECOM, based in Los Angeles, specializes in transportation consulting. The company has clients in more than 100 countries and 52,000 employees, including more than 200 in the Twin Cities. Last year, the firm acquired Ellerbe Becket, a longtime Minneapolis architectural and engineering firm that has designed many showcase projects in Minnesota and elsewhere over the years.