As Congress wrangles over extending unemployment benefits and tax cuts, Minnesota’s outgoing commissioner of the Minnesota Department of Employment and Economic Development (DEED) is taking pro-active steps in case there’s an impasse. 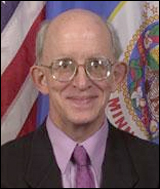 Dan McElroy is directing Workforce Center staff to do more one-on-one counseling with those whose benefits are set to run out beginning at the end of December. “If Congress chooses not to renew… the next three months are critical as federal [extended unemployment] benefits run out,” he said.

McElroy is most concerned about those affected by permanent layoffs, as opposed to the seasonally unemployed.  “We need to get those people into the workforce centers” for job counseling and placement help, he said.

As his four-year tenure as commissioner comes to an end, McElroy’s emphasis is an apt metaphor for the changes he says he has seen in the culture of the agency within DEED.

“The emphasis is no longer on [people] receiving unemployment benefits but on getting [them] re-employed,” he said.

The Legislature created DEED by merging the Department of Economic Security with Trade and Economic Development in 2003. McElroy noted at the time that the state structure was focused on “running programs really well,” pointing out that Minnesota pays unemployment benefits “as promptly and accurately as any state.”

Today, individual programs are “more tightly aligned” with the department’s overall mission of “helping individuals, communities and business achieve and maintain prosperity. We are much more one agency today than eight years ago… and I’m proud of that,” he added.

McElroy’s tenure has seen some of the toughest challenges the department has faced. At the depth of the recession in mid-2009, a record 250,000 Minnesotans were out of work as the state’s unemployment rate hit 8.4 percent, the highest rate since the 1982-83 recession.

In 2009, $2.8 billion in unemployment insurance benefits were paid out to jobless Minnesotans, $1.7 billion in regular state benefits from the State Trust Fund, and $1.1 billion in extended benefits and federal stimulus funding, according to DEED’s annual report.

DEED received more than $300 million of federal stimulus funds in 2009 as well. More than one-third of the money funded “shovel-ready” sewer and water projects in 80 local communities. Stimulus funds also paid for a variety of statewide employment and training programs and the hiring of additional job counselors.

One big challenge in today’s world of web-based job searches and online applications has been to “rapidly transition people to a new way of looking for work,” McElroy said. “Tons of employers only take an application online” and their systems will kick job seekers out after 20 or 30 minutes. “It’s terribly frustrating and not very fair, but they do it to weed out” applicants based on computer skills.

McElroy also pointed to the increased automation implemented at DEED, saying Minnesota is the only state with a second-generation, web-enabled unemployment system up and running. Eighty-five percent of DEED’s “customers” — as McElroy refers to those receiving unemployment benefits — are registered online and are paid weekly. Establishing the system in 2008 was “not without its challenges, but we wouldn’t be able to pay as promptly and accurately if we hadn’t made that investment.”

Minnesota has managed the U.S. Department of Labor’s national job search website, CareerOneStop, for more than a decade and earlier this year was awarded a multimillion-dollar contract to enhance the national site, adding many of the same features on Minnesota’s website.

Saying he’ll leave DEED with “good friends and good memories,” McElroy, 62, said, “If I had my druthers, the unemployment rate would be at pre-recession levels, but I can’t control that.”

He is set to start his next job as head of Hospitality Minnesota the day after a new administration is scheduled to take the reins of state government on Jan. 3. The industry association for restaurants, lodging and campgrounds represents a $10 billion industry that employs 250,000 people, or about 10n percent of Minnesota’s workforce, in 1,500 businesses across 2,000 separate locations, McElroy said, rattling off the statistics.

“I’m excited,” said the former state representative Burnsville mayor and travel agency owner. “The hospitality industry is the first employer for hundreds of thousands of young people,” where they get their first impressions of working and learn important life-long lessons. “It has a big impact on the economy.”