How much did you pay for that talking fish you gave your cousin last Christmas? Or the polka dot sweater you gave your niece? The fruitcake you gave your secretary? Chances are, you paid more than they would have.

Americans will “vaporize” $14 billion worth of value this holiday season buying gifts that have less value than the recipient would be willing to pay for the same item, according to a researcher at the University of Minnesota.

U of M
Joel Waldfogel

Professor Joel Waldfogel has surveyed gift recipients over the past 20 years and — in further proof that economics is “the dismal science” — he calculated that “people value stuff they receive as gifts 20 percent less, per dollar spent, than the stuff they buy themselves.”

“Parents do very well for their children, people do well buying for their friends and significant others. It’s the people who are in infrequent contact with their recipients who are at risk of destroying a lot of value,” he said.

Waldfogel derived the $14 billion from the December spike in monthly retail sales.

The gap in perceived value of a gift undermines the whole logic of gift giving, he argues. He compares the dilemma to the perennial debate about whether governments or individuals are better situated to make spending decisions.

“Santa Claus is no better situated than the government to know what we want. The same principle is at work. An uninformed gift-giver chooses things you would not have chosen.” 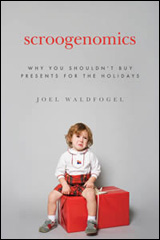 Waldfogel, the author of “Scroogenomics: Why You Shouldn’t Buy Presents for the Holidays,” suggests people keep buying gifts for those they know well — “Especially for kids. Kids deserve Santa Claus.” But he cautions potential givers, when faced with buying a gift for someone they don’t know well, “That’s where you have a problem.”

Gift giving is a “well intentioned and beautiful set of sentiments. It’s just not an efficient way to allocate resources. Resource allocation is about making choices,” he said.

Waldfogel said his findings explain the popularity of gift cards, which are estimated to reach $91 billion in sales this year, the first holiday increase in three years, according to Tower Group, a financial services consultant.

Gift cards “get around the tackiness” of giving cash Waldfogel added. “They’re very popular with givers and recipients, because they “give the recipient control over what to buy.” He pointed to research, though, that shows 10 percent of gift cards have gone unused.

Suzanne Martindale, policy associate at Consumers Union, the nonprofit publisher of Consumers Report, cautions consumers that that gift cards still can contain features that “drain value” from the card, although recent financial reforms have partially addressed some of those problems.

As a result of the Credit Card Act passed last summer, gift cards:

These protections apply to both traditional plastic and “virtual” or “e-gift” cards, Martindale said. Some gift cards issued through the end of this year may still have erroneous expiration dates printed on them because issuers were allowed to use up their stock of existing cards, creating potential confusion, but the five-year expiration limit will still apply, she said. Beginning Jan. 1, gift cards will have to contain the five-year expiration notice.

Here is a Consumers Union guide to gift cards.