Minnesota’s manufactured exports climbed 17 percent to $4.4 billion in the third quarter, compared with the same period a year ago, the third-highest quarterly exports on record, according to figures released Monday.

Exports are up 18 percent year to date to $12.6 billion, the Minnesota Department of Employment and Economic Development (DEED) reports. State exports have lagged slightly behind U.S. figures, which are up 19 percent in the third quarter and 21 percent year to date.

“Minnesota exports have come back strong this year” said DEED Commissioner Dan McElroy. “This is good news for state manufacturers and another sign that the global economy is recovering.”

Canada, Minnesota’s largest trade partner, accounted for $1.3 billion in state manufactured exports during the quarter, an increase of 26 percent from the same period last year. At more than $3.3 billion year to date, Canada accounts for nearly as much as the next-five-largest trading partners combined, with transportation equipment the largest single category of exports heading north. 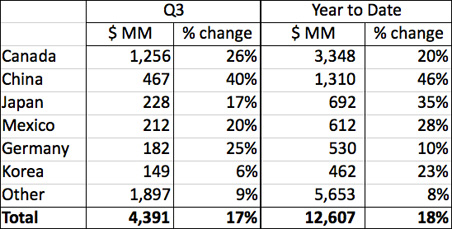 “The traditional way economists looked at manufacturing is archaic,” Meyers said. “No single producer totally sources, manufactures and ships anymore because of the restructuring of manufacturing worldwide.

Meyers noted that an “integrated supply chain” between suppliers, warehousing, distribution and individual manufacturing plants straddles the border between the United States and Canada. Using the auto industry as an example, Meyers said that an automobile manufactured in North America — beginning with taconite ore extracted in Northern Minnesota’s Iron Range to delivery to a customer — crosses between the two nations an average of seven times.

Each border crossing results in inspections that add costs and delays. By contrast, he pointed out that a car manufactured in Asia is only subject to one border inspection when it reaches the United States.

From October 2008 to March.2009, Canadian manufacturers saw orders drop 30 percent. “I don’t care how lean and efficient you are,” he said. “You can’t deal with that rapid of a drop in that short a time.”

While choosing his words carefully, he said he was “hopeful” that the incoming Congress will be friendlier to free trade and described the U.S.-China relationship as “top of mind” for Canadian industry, particularly as it affects currency exchange rates.

Since U.S.-Canada trade hit bottom in May 2009, the dollar value of Canadian manufacturing output has risen 15 percent, five times the pace of recovery in other sectors of the economy, Meyers said, and 150,000 jobs have been added back, but in new areas with different skill sets than manufacturing jobs lost.