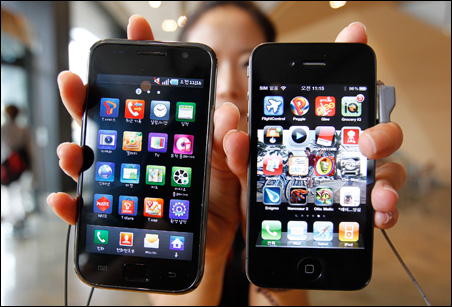 The growth of the mobile Internet is happening even faster than the growth of TV. Little more than three years after the introduction of Apple’s iPhone, there are roughly 120 million Web-enabled smartphones in use in the United States.

That’s more than one smartphone for each of the nation’s 105 million households. By contrast, it took 15 years after World War II for TV to reach 90 percent of American households.

I don’t think we can begin to imagine the effect that this hyper-connectedness will have on our society. And it’s not just happening in the United States. Japan and Korea are way ahead of us, with 3G phone service reaching 96 percent of Japanese and 80 percent of Koreans. (Only 48 percent of Americans have this high-speed phone service.)

These statistics come from a presentation by Morgan Stanley analyst Mary Meeker at a recent Web 2.0 Summit in San Francisco. Meeker raises questions that businesses and marketers should be asking themselves.

One of the key questions: Is your business leading or lagging on mobile?

The pace of mobile growth is stunning. To cite one example: Japan’s version of Facebook is called Mixi. Four years ago, 83 percent of the people using Mixi signed on from a desktop or laptop computer. Today, 84 percent of Mixi users sign on from a mobile device.

Right now in the United States, 41 percent of peak evening mobile traffic is real-time entertainment: in other words, streaming video. Close to half of the traffic on mobile phones is people watching movies, sports highlights and YouTube clips, or playing live video games.

Ad spending in print vs. Internet
Here’s another nugget from the insightful Meeker. Right now, businesses are spending too much money advertising in places where their audience isn’t living.

You could make a case that advertisers should cut their print budgets in half and double their Internet budgets — and that mobile should be a big part of the Internet buy.

It’s not that simple, obviously. A lot of Internet advertising dollars are spent on cheap pay-per-click ads that never get clicked on. And print commands a premium price in large part because it’s more attractive to the wealthier and better-educated segments of society.

But it’s quite clear that the mobile Web is going to be an ever-larger part of our lives. Businesses and marketers that aren’t already in the mobile game need to get off the bench.

Businesses spend too much ad money in print