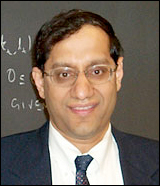 “Human beings are very adaptable,” observed V.V. Chari, professor of economics at the University of Minnesota.

If climate change results in rising sea levels, humans will figure out a way to move. But what is seldom addressed in the climate change debate, he said, is the loss of capital and the economic costs that such a scenario would entail.

“Attitudes toward risk matter a great deal in thinking about climate change,” he added.

For example, if  there is an equal chance of two possible outcomes on a community from a rising sea level — one with little economic impact, and another with large negative consequences, “especially for future generations … 30, 40, 50 years down the road — we should give more weight” to the possibility of the negative scenario occurring, he argues.

Chari, founding director of the Heller-Hurwicz Economics Institute at the U, hopes to make the Minnesota think tank a global center for just this kind of debate and analysis.

With the help of two U alumni who received their economics Ph.D.s at the U, Richard Sandor and Robert Litterman, he is launching the effort at a Wednesday event titled “Addressing Climate Change: Economic Perspectives on Pricing Environmental Risk.”

Both men will speak at the inaugural event at 5:30 p.m. at the McNamara Alumni Center. (The event is free and open to the public. RSVP here.)

Richard Sandor is described as the principal architect of interest rate futures markets and was “the key person involved in setting up derivative exchanges” at the Chicago Board of Trade in the 1970s and 80s, Chari said.  Among his many affiliations, Sandor founded the Chicago Climate Exchange in 2003 as a market where companies can voluntary trade greenhouse-gas emission rights.

Robert Litterman, retired managing director of Goldman Sachs and co-developer of the Black-Litterman Global Asset Allocation Model, has spent his professional career analyzing the consequences of uncertainty and risk on asset prices, both in academia and in the financial services industry.

Acknowledging that the political debate on climate change is “up and down,” Chari said that “given the overwhelming scientific consensus, we are going to have to do something about this sooner or later.”

Pointing out that emerging economies in China, India and Africa all want to grow rapidly, he said the idea of trading pollution rights will have to be addressed. “If we don’t have these kinds of discussions on how to trade rights and monitor markets, we will make dumb decisions down the road,” he added. “Those are hard problems.”

The mission of the Heller-Hurwicz Institute is to “use the best available economic theory and research to … have sizable effect on policy,” Chari added.