Online job postings jumped in January, showing a promising start for the year across the nation and the region, according to the newest Conference Board Help Wanted OnLine Data Series. 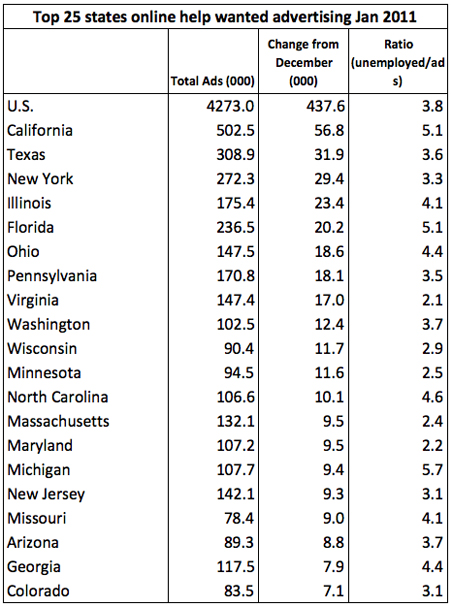 While the number of unemployed continues to exceed job openings, the Minneapolis/St. Paul metro area has one of the lowest ratios of any major metropolitan area in the country. Through November, the latest month for which data is available, there were 1.86 job seekers for every opening in the metro area.

Only Washington, D.C. (1.16) and Boston (1.84) posted better ratios. For Minnesota as a whole, there were 2.48 job seekers for every job opening advertised, compared with 3.78 nationwide. 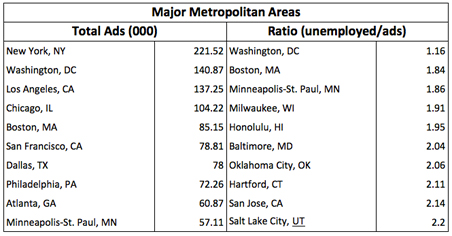 With the January increase, labor demand has risen 1.44 million since the series’ low point in April 2009. This increase now offsets about 80 percent of the 1.76 million drop in ad volume during the two-year downturn from April 2007 through April 2009, according to the Conference Board.

“Last year, after a promising start (up about 350,000 in January 2010), labor demand fizzled, and the last half of 2010 was actually flat with no appreciable gains in job demand,” she said. “Hopefully the January 2011 increase suggests that employers are seeing a pickup in their businesses and labor demand will continue to improve throughout this year.”

Since employment searches have moved to the Internet, the online survey has replaced the traditional “help wanted” newspaper advertising survey the Conference board used to issue.

The strongest demand by occupation was in health care, followed by computer and mathematical sciences, sales and related fields, office and administrative support and management.