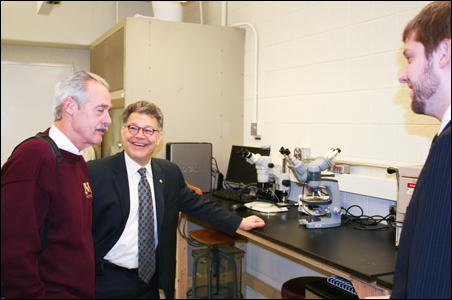 Sen. Al Franken did not hesitate when invited to take a supercomputer-powered virtual 3-D tour through a human heart at the University of Minnesota’s Medical Devices Center over the weekend.

Donning special motion-detecting 3-D glasses, Minnesota’s junior senator stepped in front of a screen projecting a virtual beating heart. As he moved in closer, dipped down or walked a few paces sideways, sensors throughout the room picked up his movements and altered the view on the screen as if he were walking through the beating heart.

Using virtualization techniques, engineers can modify device designs and simulate their performance across a wide range of variables from size and shape of a valve, for example, to the behavior of  different materials, explained Art Erdman, director of the Center. 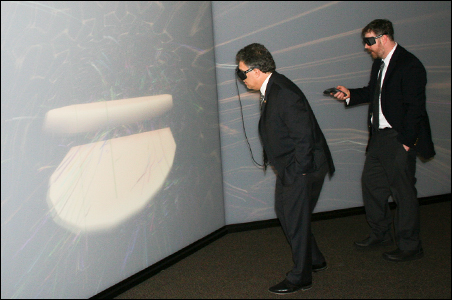 MinnPost photo by Brad Allen
Senator Al Franken explores the interior of a human heart at the U of M Medical Devices Center.

Using realistic visualization techniques that have gotten “faster and faster” because of developments in the computer game industry, it harnesses “simulation and virtual reality [in] a new way of designing medical devices that would come between  early ideas and animal and human trials,” Erdman explained.

The traditional method of creating a “best guess” design for testing in live animal trials is more time-consuming, he said. “The bottom line is engineers, when they go into animal trials, really don’t have full confidence in all the variables, but they have to move  ahead.”

Franken said he toured the center “to see how the U was interfacing” with the medical device  industry.

“We probably have more medical device jobs per capita here than any other state in the country, and we want to keep them here,” he observed.

Referring to companies that have an easier time introducing their products in Europe than in the United States, Franken said he is focused on “making sure the approval processes are done in a way that are efficient and protect the public but also don’t … drive venture capital out of this business, and [don’t] deprive Americans of the kinds of medical devices that they need. There’s a balance you have to strike.“

The Medical Devices Center was started in 2007 to “foster interdisciplinary research among faculty in the health sciences and engineering specifically related to medical devices,” according to the center’s information release.

The center’s initial $5 million funding has come primarily from  the University, with $500,000 of in-kind donations for equipment and supplies from industry and hospitals, and individual annual $50,000 grants from St. Jude and Boston Scientific, Erdman said.

After initial meetings with the FDA, the work at the center has generated interest in Washington beyond that agency, Erdman said. The center’s simulation techniques have caught the attention of the White House Office of Science and Technology Policy for its Advanced Manufacturing initiative.

He hopes to secure up to $1 million in federal funding over the next five years from either the National Institutes of Health or the National Science Foundation. He also said he will be meeting with officials from the FDA later this week, the fourth such meeting in recent months.

Erdman said the co-location of labs and adjacent workshops allows researchers, graduate and undergraduate students to easily move from a tissue lab to a computer lab to a machine shop as they work on developing new medical devices.

Three years ago, the center launched a Fellows Program for mid-career professionals that creates four-person teams of  engineers, medical device professionals, bio-scientists and physicians to collaborate for one year in medical device product research and development. Intellectual property developed during the fellowship is retained by the U, Erdman said.

So far, the program has produced 35 provisional patents, two start-up companies and one product license. In addition, the center hosts an annual medical device development conference and has provided $1.5 million in “seed funding” for cross-disciplinary research projects, Erdman said.

It also helps support  a network of 3-D surgical training tools called SimPORTAL (Simulation PeriOperative Resource for Training and Learning) within the medical school.  SimPORTAL links more than 30 operating rooms in the Fairview Health network so students can observe surgeries in 3-D. The visualization network — unique in the country — is “a 100 percent teaching tool to make [the operating room] a safer environment,” explained operations director Troy Reihsen.