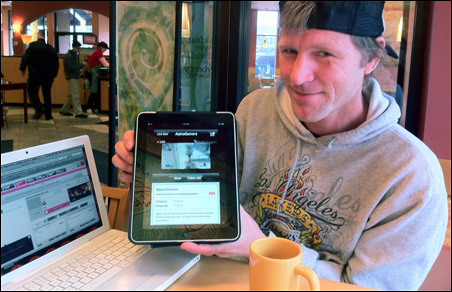 Mike Endrizzi has been around live music most of his adult life, both as a performer and a sound engineer. But sitting home one night with his 1-year-old son, Endrizzi realized that he wasn’t getting out as much as he used to.

There must be a lot of other people like me, he thought — and inspiration arrived. If it’s tough to get out of the home to see music, why not bring music into the home?

Since that night a couple years ago, Endrizzi has been developing a service to stream live concerts over the Internet from all around the Twin Cities music scene. His service, indieload.com, uses Livestream, a hosting platform that works something like YouTube. The difference is, videos that go on YouTube stay there forever. With livestreaming, “once the show ends, it’s over,” Endrizzi said.

Endrizzi is an engaging character who manages to appear both calm and tightly wound at the same time — probably a result of his day job as a public school art teacher. He’s got a missionary’s fervor about letting the world see local performers via livestreamed shows.

“We’ve got so much diversity in the music scene here,” he said. “It’s like a virtual city with all these different neighborhoods. If we could put the whole scene online, expose the world to it — it could be revolutionary.” In the last year, Endrizzi has livestreamed performances from the 331 Club, Grumpy’s and several other area venues.

Using Facebook and Twitter, the livestream audience can let friends know about the performance while it’s happening, and thus any show has the potential to go viral and grab a lot of eyeballs quickly.

“The money right now is in corporate conferencing, and I’m not interested in doing corporate conferencing,” Endrizzi said. But there are possibilities for the music business. Bands could sell music or merchandise online during their shows. Clubs could sell subscriptions to livestreamed performance series. Businesses could use livestreamed performances as a promotional tool.

In fact, a couple of local businesses are doing just that later this week. On Thursday, Calhoun Cycle in Uptown Minneapolis is kicking off the first of its “Tiny Bikeshop Concerts,” co-sponsored by Banjo Brothers, a Minneapolis-based maker of bike bags.

The performance by Minneapolis singer/songwriter Brianna Lane can be viewed in person at the bike shop — or on indieload.com, where Endrizzi will be streaming it.

Endrizzi isn’t sure where his streaming business is going, but he’s not afraid to think big.

“It could be like Elvis in Hawaii,” he said referring to the 1973 Elvis Presley concert believed to be the first performance broadcast worldwide via satellite. “Now everyone can be Elvis in Hawaii.”

IF YOU GO
What: “Tiny Bikeshop Concerts,” featuring Brianna Lane
When: Thursday, March 31, 6-8 p.m.
Where: Calhoun Cycle, 3342 Hennepin Ave. S., Minneapolis
Admission: Free
On the Web: Live streaming of the concert at www.indieload.com