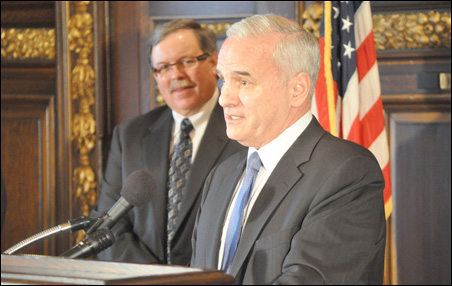 Courtesy of Gov. Dayton’s office
Gov. Dayton appointed Mark Phillips as the Commissioner of the Department of Employment and Economic Development.

“Investing in education might be one of the best economic development tools we have,” Minnesota’s new commissioner at the Department of Employment and Economic Development (DEED) told the Minnesota Chamber of Commerce Friday in St. Paul.

“I’m very concerned about education,” said Mark Phillips, speaking on a breakfast panel with two Republican lawmakers. “I grew up on the Iron Range, and … in the ’50s, it didn’t make any difference if you went to school in Eveleth or Edina. It’s not that way now. It’s your ZIP code that determines what kind of quality education you get. Something’s wrong in Minnesota.”

Phillips, likewise, noted the need to bolster his department’s programs. He said many DEED workforce programs focus on helping unemployed workers find new jobs, often at a lower level, but not on helping them find a new career.

“How can we get them some kind of training that will lead them to a second career, rather than getting them a job maybe a couple of rungs down the economic ladder?” he said.

The commissioner pointed to the large number of “disenfranchised” workers, many of whom have seen their “high touch” manufacturing jobs move overseas, as a population that needs help through certification and re-education in finding new careers. As an example, he cited an employer who told him the company was unable to fill a position because it could not find a qualified candidate with a boiler inspector license.

Phillips hopes to reform DEED
Phillips also promised the business group that he intends to make DEED more efficient: “There’s lots of reform to be done in economic development.”

He intends to combine or eliminate programs that cannot demonstrate a return on investment, but he acknowledged that will require greater trust and cooperation from the Legislature.

“There just isn’t a trust factor between DEED — whoever the governor is — and the Legislature,” he said. The Legislature wants to “do economic development by picking and choosing and setting up these little programs. They don’t eliminate a lot of them.” As an example, he pointed to a program set up to provide loans for replacement of septic systems in tourism-related facilities that has not made a loan since 2008.

To that point, Sen. Ted Lillie said, “I think there is a fair amount of trust between the new legislators and DEED, and it’s building with the Governor.” Lillie, a freshman Republican from Lake Elmo and vice chair of the Senate Jobs and Economic Growth Committee, joined Phillips on the panel.

Lillie acknowledged the proliferation of pet programs favored by lawmakers: “We as politicians want to be the champions for these programs. We are very good at saying yes. We’re not very good at measuring results, looking for outcomes, saying ‘This program is better than that aid.’ ” His committee is looking at creating a block grant system where DEED would measure program effectiveness.

Rep. Jennifer Loon, R-Eden Prairie, promised the business group she does not want to increase tax or regulatory burdens on businesses “at a time when many people are struggling just to get their business back on its feet.” She said: “My first priority will be: Do no harm.”

Loon was quick to add education as her second priority both as an economic development lever and as a matter of tax policy. “We have more people entering retirement than we have kids entering school,” she said.

That demographic trend presents a future fiscal challenge for the state “with fewer people in their prime earnings years that are the engines of tax revenue coming in.”

Loon also said the persistent academic achievement gap between white and non-white students “is worse than almost any other state in the nation … We’ve got a real problem in our state.

“We absolutely cannot afford to have that happen. We need every one of our children to graduate successfully … to be able to be productive members of our economy. Our state’s future depends on that.”

Stadium issue surfaces, too
The Minnesota Vikings organization sponsored the breakfast, so the moderator asked panel members their views about the importance of a new Vikings stadium as an economic development issue for the state.

While the two lawmakers hesitated, Phillips jumped right on the ball, identifying himself as “a big supporter, a huge Vikings fan.”

He noted that the overall impact of a Vikings stadium is hard to measure but said: “Do we want to be a major league state? Just look around at communities the size of the Twin Cities that don’t have professional athletics. Just look at their business, how many Fortune 500 companies they have. Look at the whole picture.”

Phillips said the state missed an opportunity to build the stadium in the early 2000s “when [Gov. Jesse] Ventura had the money in the bank, before he sent all those [tax rebate] checks out. We could have paid cash for it, and we wouldn’t be having that debate right now,” he said adding he was expressing his personal opinion. “I’m not sure Mark Dayton thinks like that.”

Phillips said he would not make the stadium his top priority.

Gov. Mark Dayton, he added, “does not want to see the Vikings leave under his watch.” Phillips pledged that whatever public infrastructure help is needed from DEED, “it will be there.”