As oil tops $110 a barrel for the benchmark west Texas crude and gasoline hovers near $4 a gallon, North Dakota’s output from the Bakken oil field is growing increasingly important in both the state’s economy and the national energy picture.

And North Dakota’s energy importance is only going to get larger.

A recent report from the  North Dakota Industrial Commission highlights additional shale oil formations in the Williston Basin geologic formation that increase the total potential reserves by as much as 50 percent, to a total of 6 billion barrels of oil, as well as natural gas.

Current output from the Bakken and Three Forks formations has made North Dakota the nation’s fourth-largest producer of oil. 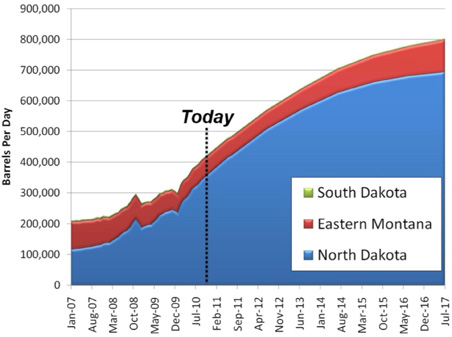 Source: North Dakota Pipeline Authority
Crude oil production forecast for the United States portion of the Williston Basin. A sustained rig count of 150 was used for the North Dakota portion.

The state also has been setting new production records almost every month, the report states. Studies conducted by the North Dakota Department of Mineral Resources in 2008 and 2010 indicate 4 billion to 6.3 billion barrels of recoverable reserves in North Dakota, it said.

Newly discovered reserves in formations dubbed Lodgepole, Tyler, and Spearfish — along with improvements in extraction technology — could double the Peace Garden State’s oil output by the end of the decade, from the 350,000 barrels a day produced at the end of 2010.

It also focuses on the region’s transportation challenges posed by the growing oil output. Currently, pipeline and rail capacity can move about 452,500 barrels of oil a day.

The report notes that industry has invested in transportation infrastructure to keep pace with growing output:

“With over a billion dollars of completed or planned oil transportation expansions, North Dakota is positioned for many more years of successful oil and natural gas development. The combination of pipeline and rail transportation that has evolved in North Dakota over the past two years has shown a great deal of creativity and ingenuity on the part of industry.”

It added: “Crude oil gathering pipelines are being constructed around the Williston Basin to help lower the overall transportation costs and reduce some of the trucking issues associated with heavy road traffic and North Dakota’s harsh winters.”

(Thanks to Ron Wirtz at the Federal Reserve Bank of Minneapolis who highlighted the NDIC report in a FedGazette note.)