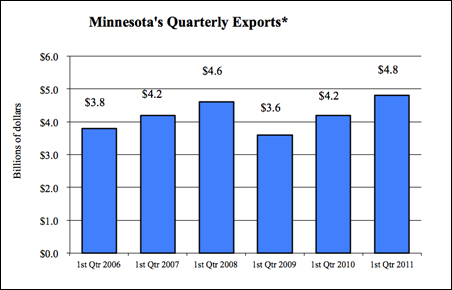 Minnesota’s first-quarter exports hit a record $4.8 billion, up 13 percent from the same period a year ago.

But, as it has for several quarters, the state’s export of manufactured, agricultural and mining products still lagged behind the 18 percent growth posted for the nation as a whole.

The report — from the Minnesota Department of Employment and Economic Development (DEED) — highlights the diversity of Minnesota’s manufacturing base, strong gains in electrical machinery and pharmaceuticals, and a stalled medical products export market.

Manufactured products were the dominant export category, accounting for $4.4 billion of total sales in the quarter, up 12 percent from the same period a year ago.

Machinery, which remains the largest export category at 20 percent of the total, hit $949 million, up 8 percent, compared with 14 percent growth nationwide. Growth drivers were centrifuges and filters (up 16 percent to $125 million), liquid pumps (up 76 percent to $59 million), and self-propelled bulldozers and scrapers (up 136 percent to $21 million).

The state’s second-largest export category — optic and medical instruments —continued to decline, as it has for several quarters, falling 3 percent to $713 million. The steepest drops occurred for orthopedic and artificial body parts (down 29 percent to $161 million) and medical and surgical instruments (down 9 percent to $223 million). Growth in exports to Canada and China, which is the largest market for the category, could not offset declines elsewhere.

“Minnesota exports continue to be strong, generating more business for companies and contributing to job growth statewide,” DEED Commissioner Mark Phillips said in a prepared release. “Exports to nine of the state’s top 10 markets expanded from a year ago, and sales for most of our products and commodities grew as well.”

Calling the results “encouraging,” Katie Clark, executive director of the Minnesota Trade Office, said: “Many small and mid-sized companies have potential to export and are not currently doing so. With 95 percent of consumers living outside of the United States, Minnesota must focus on selling its products to the global marketplace.”

Canada remains Minnesota’s largest customer, accounting for $1.3 billion in exports (27 percent of the state’s total) in the quarter, up 16 percent from a year ago.

Japan was a major buyer of the state’s agricultural exports, purchasing 62 percent of cereals (mainly corn) and 45 percent of miscellaneous grains/seeds/fruit.

For the first time, the quarterly export report has been expanded to include both manufactured and non-manufactured products but does not include services.