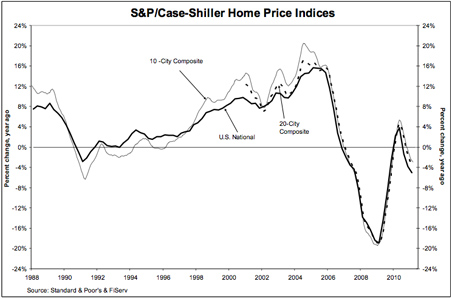 The report confirms “a double-dip in home prices across much of the nation,” David M. Blitzer, chairman of the Index Committee at S&P Indices, said in a statement. The National Index, the 20 City Composite and 12 MSAs all hit new lows in data reported through March 2011. Home prices dropped 3.6 percent across a composite of the 20 largest metropolitan areas and fell 5.1 percent nationwide from a year ago.

Housing prices are back to the level of 2002 across the nation, according to the index.

The nationwide index fell 4.2 percent from the fourth quarter of 2010 to the first quarter of 2011. Twin Cities home prices fell 3.7 percent from February to March compared with a decline of 0.8 percent across the 20-city composite. Washington, D.C., was the only city where home prices increased on a monthly (+1.1 percent) and annual (+4.3 percent) basis. Seattle was up 0.1 percent for the month, but still down 7.5 percent versus March 2010.

Twin Cities home prices plunge 10 percent from a year ago