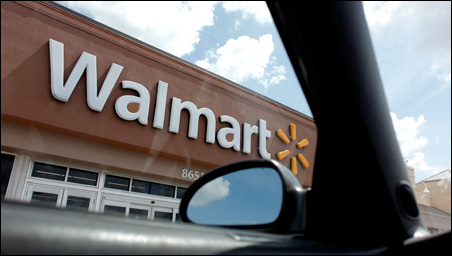 REUTERS/Carlos Barria
When even Wal-Mart is too pricey for American shoppers, you know something’s up.

The great mass market, which helped define American life over the past century and changed us from “citizens” to “consumers” may be at an end.

The culprit? Rising income inequality, which has left well-off Americans as the only group that’s willing to open its wallets these days. According to the Nielsen Co., which tracks consumer sentiment monthly, the overall willingness of consumers to spend has fallen about 7 percent over the last year.

But among Americans making more than $100,000 a year, the willingness to spend has jumped by 11 percent in just the last six months. Six-figure earners were the only slice of the American demographic more willing to spend money today than a year ago, according to Consumer Edge Research.

Need more evidence? Same-store sales, an important measure of retail strength, have dropped for eight straight quarters at Wal-Mart. Analysts speculate that its customers are shopping even farther down the retail chain, at dollar stores and cut-rate grocery markets like Aldi.

When even Wal-Mart is too pricey for American shoppers, you know something’s up.

For marketers, the question is whether to devote scarce resources to chasing penny-pinching shoppers, or focus attention on the high-income groups, which have more money but fewer members. The choice to compete on price is a tough one, because someone else can almost always decide to go lower. On the other hand, you might be able to make it up on volume. Henry Ford got rich a century ago by constantly cutting prices on his Model T and selling more of them every year.

Of course, Ford also recognized the other side of the buyer-seller relationship: The buyer has to have money. In 1914, Ford took the revolutionary step of offering his workers $5 a day, more than doubling their pay. With their new affluence, workers could afford to buy the cars they built, and other employers had to match Ford’s wages. (The Five-Dollar Day was also designed to reduce employee turnover, as the grinding monotony of Ford’s new assembly lines was driving away skilled workers.)

I don’t foresee any American employers offering to double their workers’ pay. So it’s likely that the companies poised for the greatest success will be those catering to affluent Americans. Not only will their products sell, they’ll have more leeway to raise prices without driving away bargain-conscious consumers.

It’s a change from America’s 20th Century perception of itself, nurtured by decades of advertising touting the good life available to all: new home, new car, shiny appliances, the latest gadgets.

When the economy recovers, perhaps the mass market will return in all its glory. But it may be that the Great Recession will spawn a generation of Americans that, like its 1930s forebears, has learned to squeeze a dollar until it hurts.

The great mass market is fading away