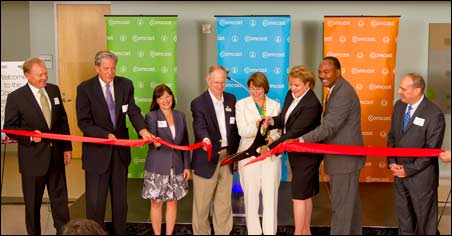 After Marlana Wenzel graduated with a degree in history and political science from Vanguard University in southern California in 2006, she returned to Minnesota figuring she’d work in a corporate job for a few years “to make some money” before starting on her desired career in teaching.

It hasn’t worked out the way she’d planned it.

Her first layoff came in 2008 “when everything started” as the economy slid into the Great Recession, she recalled recently.

Since graduating, she’s held several full- and part-time jobs in sales and customer service, the longest a part-time job at T-Mobile that lasted a year and a half.

Four months into her third layoff this spring, Wenzel was finding it harder than ever to land a new job. Wenzel, 26, of Mound estimates she had applied for 50 different positions at more than a dozen companies around the Twin Cities.

Potential employers liked her experience and enthusiasm, she said, but weren’t ready to hire. “They were just collecting information,” she said. “I couldn’t even get a call back.”

When Wenzel heard this spring that Comcast would be adding 450 jobs at a new regional call center opening in Minnetonka, she met with a recruiter at a job fair in Bloomington and put in her application. 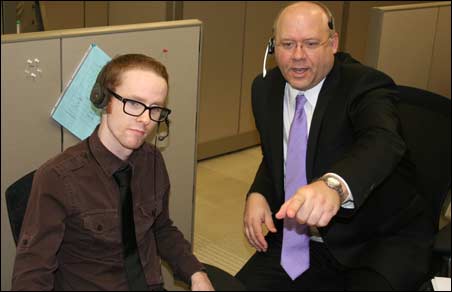 This time the response was different. “They called me back,” she said. “The recruiter followed up.” And she was hired.

Excited and nervous
As she finishes a six-week in-house training program to become a “customer loyalty account representative,” Wenzel is excited. “I’m ready… and a little nervous,” she said.

Wenzel said she can see more of a future with the telecommunications giant than her previous jobs, in part because of the training investment they’ve made in her. In previous jobs she had little or no training before beginning work. “They just threw me to the sharks.”

Wenzel considers herself fortunate. She was never able to collect unemployment, but was never out of a job longer than four months at a stretch. Her husband has maintained his job at T-Mobile throughout the past several years, so they’ve been able to get by, she explained. But this last stretch of unemployment was the most trying, she said.

I met Wenzel following a ribbon-cutting ceremony Wednesday celebrating Comcast’s opening of its 98,000-square-foot call center. She stepped out of a class of a couple of dozen trainees to talk to me. When I asked her fellow trainees how many had been unemployed immediately prior to starting at Comcast, about one third raised their hands.

Comcast Corp. (NASDAQ: CMCSA) ,the Philadelphia-based cable and telecom giant, employs about 2,000 people in Minnesota. The company has filled about 100 of the new positions in Minnetonka and expects to have all the positions filled by mid-2012, according to a spokesperson.

Minnesota site selected
Comcast invested “several million dollars” into the Minnetonka site, which it already owned, to transform it from sales and administrative offices to a regional call center, according to Cathy Kilstrom, Comcast West Division senior vice president of customer care. Minnesota won out as a location for the call center over sites in Washington, Oregon and Colorado in part because of the state’s reputation for having an educated workforce and strong work ethic, she said.

All the jobs are full time and start at $13 an hour with up to 30 percent sales commission on top of that, Swain said. The center will run from 7 a.m. to 11 p.m. seven days a week and is expected to handle an estimated 300,000 inbound calls annually from the company’s 11-state western division.

Elected officials usually show up at such occasions to tout their role in bringing federal or state aid or pointing to a particular program that helped create the new jobs, but Comcast did this all without state or federal money.

When asked why they all turned out for the ceremony, company representatives and elected officials alike all gave the same answer. “It’s about the jobs,” was the common refrain.

“We’ll throw a parade for any company that provides 20 jobs,” said Dave Olson, president of the Minnesota Chamber of Commerce. For an development like this, the big turnout seemed appropriate, he said.