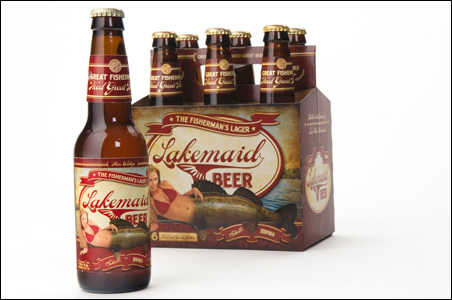 Courtesy of Pocket Hercules
The idea behind Lakemaid was to develop a summer beer that would appeal to the fishing-and-cabin crowd.

Marketing agencies are paid to come up with great ideas that sell other people’s products. But what if an agency had a great idea for a product that doesn’t exist yet?

When that inspiration strikes, a growing number of agencies are deciding that they can launch it themselves. They get the benefits and profits (if any) of ownership, and can use their creations to promote their agency as well as the businesses of their existing clients.

That’s what Minneapolis agency Pocket Hercules did with Lakemaid Beer, a limited-edition brew that’s sold only from the fishing opener through Labor Day.

“You’re always coming up with ideas, and sometimes you come up with an idea that doesn’t fit your current project but would be good for something else,” said Jack Supple, chief creative officer of Pocket Hercules and one of the agency’s founders. “So you set it aside. But in this case, we believed in it enough to give it life.”

The idea was for a summer beer that would appeal to the fishing-and-cabin crowd, built around the myth of mermaid-like creatures inhabiting the lakes of Minnesota. It was a great fit for Pocket Hercules, because the agency’s clients include Schell’s Brewery, Rapala Fishing Lures and the International Game Fish Association (IGFA).

Lakemaid was launched in 2008 and now sells about 50,000 cases during its summer run each year. That’s not going to throw a scare into the brewing giants, but Supple said Lakemaid is breaking even and may be poised to start turning a profit soon. Schell’s developed the formula and brews the beer, and a portion of the sales goes to support the IGFA.

It’s a fun brand that’s become known for a playful approach to marketing. Each Lakemaid bottle cap has something on the bottom — a fish, a weather condition, a piece of fishing lore. Lakemaid drinkers are encouraged to play the “bottle cap game” — but are given no rules or instructions for the game.

“People say, ‘Hey, what do we do?’ and we don’t tell them,” Supple said with a laugh. “They figure it out themselves. That’s part of the engagement. It’s become a bar phenomenon, a sitting-around-the-cabin phenomenon.” 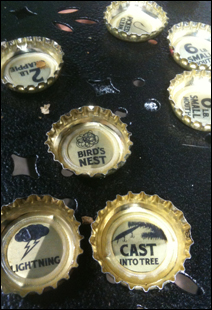 Minnesotans of a certain age can remember when Coors beer was available only in the Rocky Mountain states. It was a big deal when someone came back from a Colorado ski trip with a case of Coors. Now Coors is one of the two giant brewing companies that control 80 percent of the U.S. market, and beers like Lakemaid have the cult following.

“People will go a long way for this beer,” Supple said. “We had guys drive up from Omaha — the Omaha Toads Bass Club drove up to fill their pickups with Lakemaid.”

The beer is good, too, and that’s important. Schell’s President Ted Marti developed the formula himself. If the beer was disappointing, Supple said, “then all the mystique and the shtick wouldn’t be as fun. It’s not like you’ve been ‘had’ by a joke — you’re in with a good beer.”

Pocket Hercules also has launched a coffee brand, Tiny Footprint, aimed at an environmentally aware audience. Tiny Footprint claims to actually be carbon-negative; the company sponsors the planting of trees in an Ecuadoran rainforest that suck up more carbon emissions than the coffee production creates.

I asked Supple if operating his own brands risks dropping the ball on work for “real” clients.

“No, it’s kind of like the shoemaker’s kids,” he said. “Your clients always get served first, so your own brands get served last. But it helps you understand what your clients go through with lots of ideas and limited budgets.

“We’ve learned a lot about the inner relationships of budgets and the power of ideas and marketing and social engagement. We believe that as we go forward and grow these brands, one day they’ll become little annuities for us.”