A controversial proposed pipeline that would carry up to a million barrels a day of tar sands oil from Canada would come no closer to Minnesota than central South Dakota on its 1,700-mile route to the Gulf of Mexico.

But even so, the Keystone XL pipeline found its way into the Gopher State Wednesday in the form of a media conference call orchestrated by the Institute for 21st Century Energy, the energy policy advocacy arm of the U.S. Chamber of Commerce.

Because the proposed $7 billion pipeline project crosses an international boundary, the State Department has final authority to approve or deny a permit to the pipeline builder, Calgary-based TransCanada Corp. The State Department last month released its final Environmental Impact Statement, which did not block the project. Its release starts a 90-day comment period before final rules are issued, likely sometime in December.

Even though the proposed route of the pipeline would not touch Minnesota or neighboring North Dakota, the Chamber advocacy group launched an effort to generate public awareness and support for the pipeline by touting its economic benefits to neighboring states. The public relations effort coincides with public hearings being held in the six states along the proposed route (Montana, South Dakota, Nebraska, Kansas, Oklahoma and Texas).

Karen Harbert, president and CEO of the energy institute, estimated that the pipeline expansion would generate 20,000 manufacturing and construction jobs over the next year, including in nearby states such as Minnesota that would be suppliers and manufacturers servicing the construction.

The institute also estimates that an additional $20 billion would be spent on food, lodging, fuel, vehicles, equipment, construction supplies and services during construction. Also, the institute says, $138 million in annual property taxes would accrue to communities along the route; and up to 600,000 jobs related to the pipeline, suppliers and oil field would be created over the lifetime of the pipeline through 2035.

Nearly doubling the capacity of the existing Keystone system will enable refiners to transport about 1.1 million barrels of crude oil daily, non-stop from Alberta, Canada, to market hubs in the Midwest and Texas, Harbert said.

Dan Dorman, a former Republican state representative from Albert Lea, who currently heads the economic development authority there and owns Hanson Tire Service, provided a local Minnesota face to the call, speaking as a small-business owner. He was recruited to participate in the call by Minneapolis-based PR and lobbying group,  Public Affairs Co., which lists the Chamber of Commerce as a client.

Dorman estimated that the rising cost of oil, a major ingredient in tires, has boosted prices to his customers as much as 60 percent over the past four years. “On the one hand, our sales go up, but it sucks money out of the economy,” he added.

“Anything we can do to support energy independence from the Middle East is a good thing,” Dorman said.  “Maybe it won’t lower oil costs, but it will help stop increases. It will have a benefit.”

Domestic political fallout surrounding the pipeline project can get as complicated as international diplomacy or pipeline design.

While the proposed Keystone XL pipeline route would skirt the southwestern corner of North Dakota, officials there and in Montana have lobbied TransCanada Corp. to allow them to move oil from the Williston Basin oil fields in western North Dakota and eastern Montana through the pipeline. 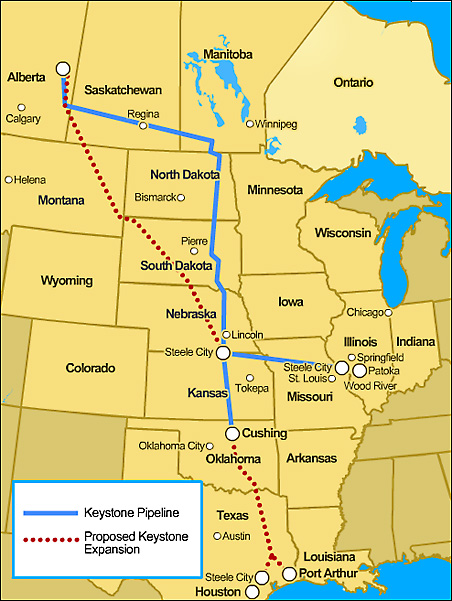 Courtesy of fuelingus.org
The proposed route of the 1,700-mile Keystone XL pipeline

North Dakota officials came out in support of the pipeline Wednesday, according to an Associated Press story, which reported that the state’s governor, attorney general, agriculture commissioner and Industrial Commission endorsed the project in a letter to Secretary of State Hillary Clinton.

“As North Dakota continues to expand its oil production, we must also expand the distribution system,” Republican Gov. Jack Dalrymple was quoted by the AP. “It’s important that we have a system that can handle our growing Williston Basin production, and the Keystone pipeline can help do just that.”

Montana’s Democratic governor, Brain Scheitzer, has been pressured to reverse earlier support of the pipeline project, with protesters occupying his office for a few hours in July.

The proposed pipeline has drawn strong opposition in Nebraska as well, where Republican Gov. David Heineman has voiced objections to the pipeline’s proposed route over the Ogallala aquifer, fearing it would threaten farmers and ranchers’ water sources.

A recent Reuters article suggested that “Obama’s bitterest political enemies” — the arch-conservative brothers Charles and David Koch — would stand to benefit from the administration’s approval of the project through their ownership of privately held Koch Industries, which is a major importer and refiner of Canadian tar sands oil.

The article, written by environmental writer David Sassoon, recounts the brothers’ history as prominent Tea Party financial backers and strong climate-change skeptics, and describes them as “among the most powerful opponents of his [President Obama’s] clean economy agenda.”

Koch Industries has denied the assertion that it would gain from the Keystone pipeline expansion, stating that it has “no financial stake in the pipeline” and is “not a proposed shipper or customer of oil delivered by this pipeline.”

In one more hometown connection, Minnesota’s Flint Hills Resources’ Pine Bend Refinery in Rosemount, which is owned by Koch Industries, is among the top processors of Canadian crude in the U.S. and supplies much of the jet fuel used at the Minneapolis-St. Paul International Airport, according to the company website.