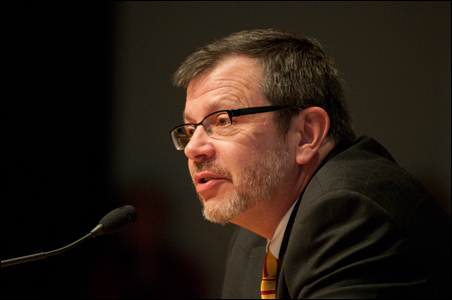 MinnPost photo by John Noltner
Eric Kaler has wasted no time getting to know the Minnesota business community.

The University of Minnesota’s new president has wasted no time getting to know and be known in the Minnesota business community.

In his first 90 days on the job, Eric Kaler has met with Minnesota Chamber of Commerce, the Itasca Project, the Minnesota Business Partnership and agribusiness leaders at FarmFest.

Two weeks ago, he keynoted an awards ceremony at 3M honoring outstanding technical employees and has had numerous individual sit-downs with CEOs around the state, as well as meetings with local business leaders in Morris and Crookston. He plans to visit Rochester and Duluth in the next few days.

So, Kaler’s Tuesday appearance before the Minneapolis Chamber of Commerce was a well-rehearsed repetition of themes he has emphasized since arriving at the Twin cities campus as the U’s 16th president.

I asked him why the focus on reaching out to the business community so early in his tenure.

“I want the business groups to realize the value of the University of Minnesota and to help us tell the story of what we do, why we return value on the investments the state makes in us and why a strong research university is essential for the state of Minnesota,” he said.

“It’s one of the important constituencies I’ve been reaching out to. We need to partner with them. I wish I could think of a different word besides partnership. We need to work with them.”

Coming into the job, did Kaler perceive a gap in the U’s relationship with the business community?

“I think we have an opportunity. I think they’ve been doing a good job. I think we need to do a great job.”

“People of all political stripes should see the value of what we do and … and, of course, should communicate that value to their elected representatives because they’re the ones making the decisions.”

He touted the U’s increasing academic selectivity, citing record-high ACT scores for the 5,378 incoming freshmen, a nearly 8-to-1 applicant-to-enrollment ratio and the most National Merit Scholars among the Big Ten schools (167).

Citing Gov. Mark Dayton’s remarks at his inauguration ceremony, Kaler estimates that the U’s economic impact on Minnesota was $8.6 billion last year, similar to the combined impact of the eight largest research universities in Boston. Kaler told the Chamber audience that the U last year received more than $800 million for research, putting Minnesota 8th nationally in externally funded studies across all academic disciplines.

But after he got done touting the U’s accomplishments, Kaler warned the audience that the future health of Minnesota’s economy and business climate are threatened by the general decline in science, technology, engineering and math (STEM) education.

Kaler cited 2010 test results from the Minnesota Department of Education that showed less than half of Minnesota 11th-grade students scored “proficient” on the state’s  math test and significantly lower percentages of Asian, Hispanic, American Indian and African-American students.

He cited demographic trends and the continuing achievement gap. With half of the population in the Twin Cities metro area expected to be people of color by 2035, Kaler noted the potential impact on Minnesota’s economy and state’s workforce if the gap can’t be closed.

“We cannot fail now in the basic sciences and math and expect to support a state long known for its discoveries in health science, manufacturing, agribusiness and high technology to continue to succeed.”

Kaler called for support in upgrading K-12 education and closing the achievement gap across demographic lines within the state, describing the U as having a valuable role to play in closing the gap and improving performance in STEM education in particular.