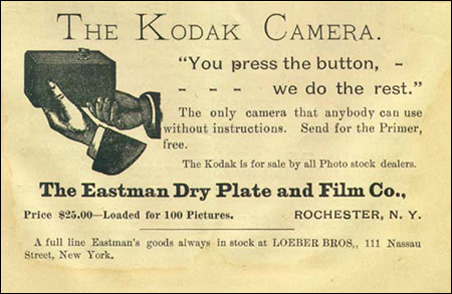 patentplaques.com
More than a century ago, Kodak was a company as revolutionary as Apple is today, in its technology as well as its marketing.

The big news last week was the death of Apple’s co-founder Steve Jobs. Because the immense legacy of Jobs sucked all the oxygen out of the room, the looming death of another great American technology icon got little attention.

But I noticed, because for a few years in the mid-1990s I was a newspaper reporter in Rochester, N.Y. — the home of Eastman Kodak.

More than a century ago, Kodak was a company as revolutionary as Apple is today, in its technology as well as its marketing. Before Kodak, photography was a messy and physically taxing activity requiring special expertise.

Kodak’s founder, George Eastman, developed celluloid roll film that replaced the glass negatives then in use.

But his real genius was in marketing.  Kodak cameras came pre-loaded with enough film for 100 pictures. When you used them up, you mailed the entire camera back to the factory and they sent back your photos and a freshly loaded camera.

Kodak made things easy on the consumer, much as Jobs did with Apple’s brilliantly designed products. Kodak cameras, like iPods and iPhones, were simple and intuitive to use.

Like Jobs, Eastman also knew how to sell his goods. Kodak popularized one of the earliest mass advertising slogans in America: “You press the button, we do the rest.”

Even the name “Kodak” was created by Eastman. He thought the letter “k” had strong properties, and so he devised the company name himself, working on the principles that it should be short, not susceptible to mispronunciation, and unique — not resembling or associated with anything but itself.

In this, Eastman was 100 years ahead of the marketing industry, which now hires specialized agencies to come up with new product names.

Rochester is a beautiful city with a cultural scene far beyond its size, much of it the result of the legacies of wealthy families who invested early in Kodak. I greatly enjoyed my time there. But even 15 years ago, it was obvious that Kodak was slipping.

First Fuji and other Japanese competitors undercut its profitable film and paper business. Then digital photography — which Kodak had invented — took off, and Kodak was slow to respond.

In that, the company was like the newspaper business, which grew so fat after decades of virtual monopoly that it failed to realize the threat from digital communication and advertising.

Kodak, which at its peak employed more than 60,000 people in Rochester, now employs fewer than 7,000 there. And late last month, its stock crashed to less than $1 a share on news that the company had hired a law firm specializing in helping companies file for bankruptcy. Kodak has denied that bankruptcy is imminent, but the denial rings hollow to me.

Newspapers and Kodak, two icons of 20th century industry and culture, both flailing and sickly in the early decades of the 21st century.

It doesn’t seem possible that Apple could one day join them — but then again, nobody 30 years ago ever would have predicted the end of newspapers and Kodak.