At noon today, a Target Corp. employee from Northfield, Seth Coleman, intends to deliver nearly 190,000 signatures gathered in an online petition drive to the Minneapolis-based retailer’s Nicollet Mall headquarters. The petition calls on CEO Gregg Steinhafel to reconsider Target’s midnight Thanksgiving kickoff and push it back to 5 a.m. Friday, the same as last year.

Target and Change.org spokespeople both said they have not been in contact with each other.

In an email exchange, Coleman said that he will be surprised “to get past the front desk … let alone speak to any management.”

Coleman has only worked at Target a few weeks, unloading trucks. He became aware of the Target petition drive, started by a Target employee in Omaha last weekend — “the same day I found out about my own schedule. I am scheduled for 4 a.m. – 10:45 a.m. on Thanksgiving morning and I have to return at 11 p.m. – 8 a.m. to help with the midnight opening for Black Friday. So that makes two shifts for me on Thanksgiving day.”

“As it stands now, since Target has taken no action to remedy this situation, I will not be coming in to work on the holiday. And as such I don’t expect to be employed at this time tomorrow.  Especially after the petition delivery.”

Black Friday attentions keeps growing
In an economy with more than 70 percent of gross domestic product derived from personal-consumption spending and many retailers counting on the critical end-of-year shopping season for an outsized share of their annual profits, Black Friday has taken on enormous importance. 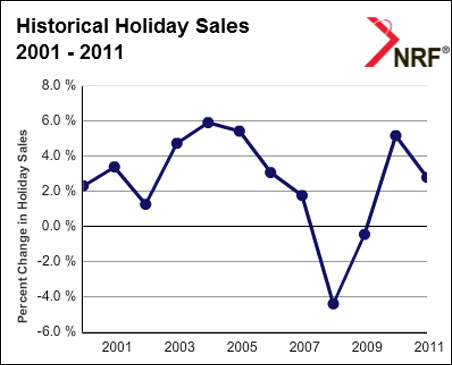 The National Retail Federation (NRF) projects that as many as 152 million consumers will descend on malls and stores across the country over the three-day Black Friday weekend. That number is up 10 percent from the 138 million who said they planned to take part last year. The busy holiday shopping season is also expected to produce up to half a million seasonal jobs.

But the NRF also has projected that consumer spending will grow only 2.8 percent to $465.6 billion this holiday season, down from 5.2 percent growth last year and more in line with historical trends over the last decade.

Total spending on gifts is projected to average $704 per shopper, down from about $719 last year and a peak of $755 in 2007, according to a separate NRF survey.

From Facebook and Twitter announcements of one-day specials to online-only deals, to meet-any-price promotions, retailers jockeying for a share of consumers’ tight holiday wallets have become accustomed to matching tactic for tactic.

One tactic in particular — the earlier-than-ever store openings meant to lure turkey-stuffed bargain-hunters — has many discount retailers pushing midnight sales and a few even opening their doors on Thanksgiving Day itself.

Anthony Hardwick, the Target employee from Omaha, launched the campaign after Target announced its earliest post-Thanksgiving store opening ever. He initiated the petition on Change.org, which describes itself as “an online advocacy platform” that enables supporters (of mostly progressive issues) to flood a particular petitioner’s target with individual emails.

The petition, which says that the late-night opening robs employees of time with their families, echoes the populist rhetoric of the Occupy Wall Street movement, arguing that “a full holiday with family is not just for the elite of this nation — all Americans should be able to break bread with loved ones and get a good night’s rest on Thanksgiving!”

Coleman, the local Target employee, will be accompanied by an organizer from Change.org, when he attempts to deliver the petition on behalf of Hardwick.

Another petition aims at Best Buy
The Target petition also inspired a Best Buy employee from Florida, Rick Melaragni, to launch a similar drive, calling on CEO Brian Dunn to push the Richfield-based consumer electronics retailer’s Black Friday opening back from midnight to 5 a.m. as well. So far, that petition has gathered about 14,000 supporters.

Best Buy issued a statement saying “customers have told us – and our competitors – that they plan to shop on Thanksgiving Day, and earlier than ever on Black Friday. We therefore made the difficult decision to move our opening Black Friday to midnight. We know this decision changes Thanksgiving plans for some of our employees, and we empathize with those who are affected,” the statement said.

The push for early store openings is most prevalent among discount retailers.

Kmart, a subsidiary of Sears, is open all day Thanksgiving, continuing a 20-year tradition.  Toys “R” Us is next in line, opening at 9 p.m. on Thanksgiving evening, followed by Walmart kicking things off at 10 p.m. In addition to Target and Best Buy, other retailers announcing midnight store openings include Kohl’s Department Stores,  and Macy’s, while Sears  has said it will open stores at 4 a.m. Friday.

Petition drives aimed at these other retailers also have been launched, but the Target petition has garnered the most support by far. Change.org spokesperson Charlotte Hill said the Target petition was launched first (Nov. 11) and quickly gained national media exposure, which explains the larger support for the campaign.