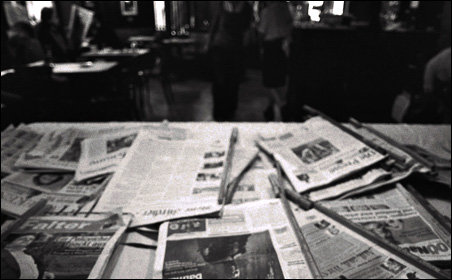 Photo courtesy of Alex Barth
The modern news consumer has many choices, and often the key to engaging a reader or viewer is simply to be first with the story.

A couple of months ago, I wrote that the end of newspapers is closer than you think. Since then, events have lent credence to that prediction.

Most notably, several newspaper companies have moved decisively toward a digital-first identity. Let me explain why that’s a big deal.

In the infancy of the Web — barely a decade ago — newspapers often held their scoops for the morning print edition. And TV stations held their best stuff for the 10 o’clock news.

Though the newspapers and TV stations had websites, they didn’t want to publish significant stories on the Web first, fearing that the competition could follow up with its own version during the same publishing or broadcast cycle. That line of thinking went out the window a few years ago. Now, media organizations almost always publish their news to the Web as soon as they can.

Many TV stations and newspapers still do hold out some exclusive content to give people an extra incentive to watch their broadcast or buy the print newspaper. But those are usually so-called “enterprise” stories involving significant reporting that can’t be easily repurposed by a competitor.

For the most part, there’s been a recognition of the importance of immediacy. The modern news consumer has many choices, and often the key to engaging a reader or viewer is simply to be first with the story, rather than offering the most insightful or the most complete version.

Now, several newspaper companies have gone all-in on that notion:

•    Booth Newspapers, which publishes eight newspapers in Michigan cities like Grand Rapids and Kalamazoo, announced last month that it’s adopting a digital-first strategy. Most of its newspapers will cut back home delivery of print editions from seven days a week to three. As further proof of its commitment to the digital world, the company is changing its name to MLive.

•    GateHouse Media, which owns nearly 500 newspapers — mostly small-town dailies, weeklies and shoppers — announced an acceleration of its digital efforts as part of “Project Apple.” Newspapers, the GateHouse CEO declared, are “a product declining in popularity and readership.”

•    The Roanoke (Va.) Times, owned by Landmark Media Enterprises, announced job cuts and a reorganization geared toward “building a newsroom that is oriented first toward delivering news online.” Said Editor Carole Tarrant in a memo to her staff: “We do not expect to see growth in our print advertising base. … We are pursuing growth where growth continues to reside — on the digital side of our company.”

•    Just last week, Pittsburgh got a new, digital-only afternoon newspaper. The Pittsburgh Press launched under the same name that died 18 years ago when the competing Post-Gazette bought and closed the Press.

•    New York Times journalist David Carr published a compelling look at the strategy of John Paton, CEO of MediaNews Group — the nation’s second-largest newspaper company and owner of the Pioneer Press. Wrote Carr: “[Paton] is absolutely convinced that if newspapers are to survive, they will all but have to set themselves on fire, eventually forsaking print and becoming digital news operations.”

Nobody loves print newspapers more than I do. I’ve been reading at least three newspapers a day since I was 7 years old, and there have been few thrills in my life to match the occasions when I’d walk into a coffee shop and see people reading a front-page story of mine.

But the growing body of evidence is overwhelming. Many of the people who run our nation’s newspapers have decided that the future of their print product is unsustainable.

I hope they’re wrong. But I wouldn’t bet on it.