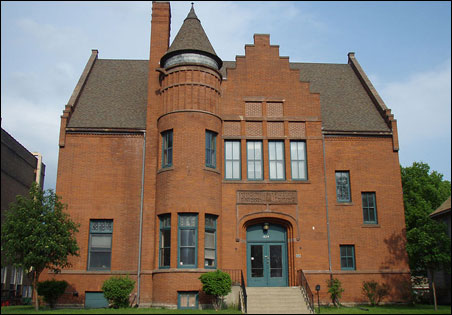 A group of historic preservation advocates huddled in the former North Branch Library, a bare, unheated old red brick castle on Emerson Avenue in North Minneapolis earlier this week, as the first real taste of winter came to the Twin Cities.

The event, co-sponsored by the Minnesota Historical Society and the Preservation Alliance of Minnesota, was called to report on anticipated economic benefits from the first projects eligible for the state’s Historic Rehabilitation Tax Credit, enacted a year ago.

“While there are no silver bullets that will solve our economic challenges, there are a number of solutions that will help make things better,” Minnesota Historical Society Director Steve Elliott told the gathering. “The historic tax credit is one of those things. Every little bit helps.”

The first 14 projects eligible for the 20 percent state tax credit (a dozen in the Twin Cities — including the North Branch Library — and two in Duluth,) will generate $9.20 in economic activity for every dollar the state provides in tax relief or grants. That’s the finding of a study by the University of Minnesota Extension Center for Community Vitality that was forwarded to the Legislature last week.

Project developers anticipate paying $83.7 million in wages to about 1,800 construction workers.  The study projects a total of 2,948 jobs with wages of $152.4 million, including employment in ancillary services such as architectural and engineering firms, as well as food, beverage and retail outlets expected to benefit during construction. The projects, once completed, are eligible for up to $49.1 million in state tax credits and will produce up to $451 million in total economic activity, the report concludes.

Rehab of existing buildings is more labor-intensive than new construction, and that is part of the intended benefit.

Last month, Minnesota’s construction sector saw its first slight year-over-year job growth in five and a half years. But total construction employment is down 40 percent, or 50,000 jobs, from 2006, according to the Minnesota Department of Employment and Economic Development (DEED).

Reflecting on the rehab tax credit, Dave Semerad, president of Associated General Contractors of Minnesota, told the audience: “Our industry has been devastated. We call it a depression.”

“It’s cold in here, but you can’t help but be warmed by what we’re doing,” Semerad added. “We’re taking this old gem of a building and transforming it for this community, and in the process, we’re putting people to work.”

David Kelliher, director of public policy at the Minnesota Historical Society, believes the state tax credit has stimulated rehab activity that would not have happened otherwise.

He estimated that more than two dozen projects are “in the pipeline” since Minnesota became the 31st state to pass its own historic rehab tax credit. He compares that with the previous year when only two projects in the state receiving federal rehab tax credits, which is a requirement for state eligibility.

The historic rehabilitation tax credit was part of an omnibus jobs bill signed in April 2010 by then Gov. Tim Pawlenty that included a variety of other tax incentives, including the angel investor tax credit, tax increment financing for local government, and a doubling of the state’s R&D tax credit for business investments.

Supporters had been pushing for the preservation tax credit for several years as a stand-alone measure but were unable to get it passed until combining it with other measures favored by Pawlenty, according to Rep. Joe Mullery a Minneapolis DFLer who attended the meeting.

The old North Branch Library, built in 1893, was the first open-shelf library in Hennepin County and influenced the growth and development of the Minneapolis public library system.  It served as a public library until 1979.

Designed by Minneapolis architect Frederick Corser, the library is among several of his buildings listed on the National Register of Historic Places, also a requirement for receiving tax credits. Described by some architectural commentators as “medieval revival style” and “Chaeteauesque,” the building has several distinctive features — its tower, a stepped front gable, and an arched entrance shaped like a basket handle — that stand out in the mixed commercial-residential district of more recent and unmemorable buildings.

Project Emerge, a local nonprofit that provides job training and placement, will use the renovated library as a career and technology center with offices, classrooms and a community center.  The $4.8 million rehab, including an expected $560,000 state tax credit, will start next spring and is expected to be completed by early 2013.

Standing under the vaulted ceiling Mullery said: “This building brings back really fond memories. Serving his eighth term as a representative from North Minneapolis, he recalled travelling on the streetcar down Broadway Avenue with his mother to visit the library.

‘When I was little, I used to come down here … and I remember thinking what a fantastic looking building this was. The only thing that was different, though — it was a lot bigger then,” he recalled. When he was in high school, Mullery regarded the distinctive castle as something beautiful to be proud of as a North Side resident.

Today, the surrounding neighborhood is struggling economically. Parts of North Minneapolis suffer from 40 percent unemployment, Mullery said. In addition, the area is home to one of the highest home-foreclosure rates in the country, having been a target of mortgage fraud schemes aimed at minorities. And last spring, a tornado  blew through the North Side, tearing up whole blocks of houses.

Recounting these challenges, Mullery said he sees the library rehabilitation as a visible sign of revitalization, demonstrating to residents that “something positive is happening.”

At the end of the event, a small group went on a tour of the cavernous old building, moving quickly through the cold cement basement. When the tour ended, everyone dispersed quickly to warm cars, leaving the old library unoccupied again and tomb-cold, waiting for spring.