Painfully slow gains on the nation’s jobs front were reported this morning as private-sector employers continued to add jobs in October, while declines continued in government employment.

Total payrolls grew by 80,000 for the month, and the unemployment rate dipped 0.1 point to 9.0 percent, according to the U.S. Bureau of Labor Statistics (BLS).

Payrolls have grown by an average of 125,000 per month over the past 12 months, according to the BLS survey of employers. In October, private-sector employment increased by 104,000, driven by continued job growth in professional and business services, leisure and hospitality, health care and mining. 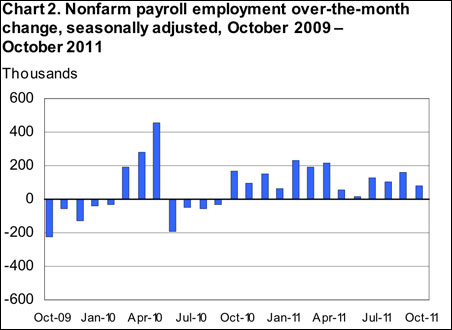 Employment numbers for the previous two months were revised upward by a total of 102,000.

In a separate household survey, the BLS reported a total of 13.9 million people remain unemployed, down from 14.8 million a year ago.

The number of discouraged workers who have stopped looking for a job stood at 967,000 in October, a decrease of 252,000 from a year earlier. 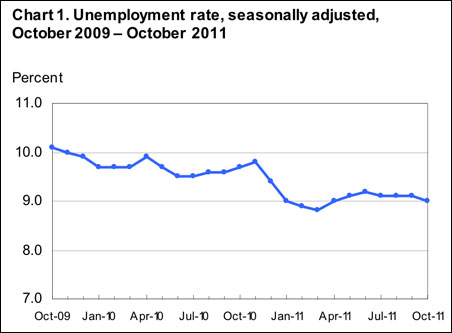 “At first blush, it looks a little on the soft side,” observed David Joy, chief market strategist for Minneapolis-based Ameriprise Financial. However, Joy pointed to the upward revisions saying the October number also might be revised upward. He described today’s report as consistent with recent trends, saying it offered “no surprise.”

“It’s something the market will take in stride, “he said. “On balance, I think it’s a decent report. I wouldn’t call it a game changer.”

Speaking from his Boston office, Joy said he does not expect a “robust” holiday shopping season. He described temporary seasonal hiring by retailers as “modestly positive, suggesting some degree of optimism.”

Joy estimated the U.S. economy will grow 2 to 2.5 percent “for the foreseeable future” and said the chances of a “double-dip recession have receded significantly, at least in the U.S,” but have risen significantly in Europe. He said there is “less than a one in four chance” of the economy slipping back into a recession over the next 12 months.

In addition, Montagne pointed to a report by the payroll processing firm ADP that showed “some real strength” in small-business hiring that is not captured by the BLS report.

“Small businesses are leading the way in any improvement we’re seeing in this country,” she said. “That is the key. If you’ve got government laying off people, you do need individuals to take the initiative and create their own businesses, very slowly and methodically” adding jobs, she said.

“That’s a real positive …That improvement is not captured in these (BLS) numbers,” she added.

Initial claims for unemployment continued to decline as the four-week moving average fell 10.3 percent from a year ago to a seasonally adjusted 404,500 total claims, according to t a U.S. Department of Labor report. For the most recent week, initial claims fell below the 400,000 mark, which is considered a significant benchmark by labor economists.

After reaching a 28-month high in September, the number of planned job cuts announced by U.S.-based employers “plunged” 63 percent in October to 42,759, according to a separate report issued by Chicago-based outplacement firm Challenger, Gray & Christmas.  While U.S.-based employers announced plans to hire nearly 160,000 workers in the future, 95 percent of those jobs are seasonal retail jobs, Challenger reported.

Despite that bit of good news, layoff announcements are running well ahead of last year, with 521,823 planned job cuts announced so far in 2011, up 16 percent from a year ago. Thirty percent of announced layoffs this year were in government, primarily at the state and local levels. Minnesota employers announced 1,269 future job cuts in October, according to the Challenger report.