Industry will have an easier path to tapping the brain power, laboratories and infrastructure at one of the premier research institutions in the country as a result of changes the University of Minnesota is making to simplify ground rules for privately sponsored research.

Last week’s announcement followed approval by the Board of Regents of Minnesota Innovation Partnerships, dubbed MN-IP.

The new effort was previewed at the Carlson School of Management a few days earlier by University President Eric Kaler, who described it as a “unique approach” to handling intellectual property (IP) that results from private, industry-funded research.

Kaler predicted that the changes “will make the University of Minnesota a research destination of choice” for corporations.

Source: U of M Office of VP for Research

As groundbreaking as it is, MN-IP also is a response by the U to new fiscal realities that all public research universities face as state and federal budgets continue to get squeezed.

MN-IP abandons the often-antagonistic and always-drawn-out wrangling over who owns the patents and licenses, or IP, that result from industry-funded research.

While industry may have desired the intellectual firepower within the U, wrangling over patent rights led to negotiations that “usually took months and sometimes years to resolve,” according to Tim Mulcahy, the U’s vice president of research, who championed the new guidelines.

As a result, industry sponsors now will pay an upfront fee of 10 percent of the contract, or a minimum of $15,000, in exchange for exclusive license to the IP. The U would only begin collecting royalties if sales from the IP exceed $20 million.

This arrangement means that private research partners will know what to expect up front and won’t have to spend time negotiating patent rights, Mulcahy said.

The change is a “very reasonable tradeoff,” he added, noting that the royalty stream attributable to privately sponsored research “was real but not very large. We’re not forgoing large sums. In fact, other elements [of industry relationships] are even more valuable.”

The single-largest royalty stream in the University’s history dried up this year when several patents expired. Over the last decade, they delivered more than $420 million, which was divided among the university, the College of Pharmacy and the faculty members who developed the patents at the heart of the licenses.

That bonanza resulted from federally funded research that led to the AIDS drug Ziagen, marketed by the pharmaceutical giant GlaxoSmithKline plc.

Because that research was federally funded, it would not have fallen under the new guidelines anyway. License revenue for privately funded research totaled about $10.1 million this year, according to Mulcahy’s office.

Mulcahy expects medical/life science research and engineering, as well as agriculture and food science, to be the largest initial beneficiaries of the changed policy. He hopes to see corporate-sponsored research increase over the next two years from its current 6 percent of total research funding.

Shaye Mandle — vice president of Government and Affiliate Relations at Life Science Alley, a med tech industry trade association — described the move as “incredibly innovative and far outside the norm” of what other universities are doing.

Mandle, who was responsible for industry engagement when he worked at the University of Memphis, noted that most university research is federally funded,with the requirement that  the university retain patent rights. As a result, he said,  researchers tend to approach industry-sponsored research with the same mindset.

He also said that the large publicly funded research institutions, such as the U of M, will increasingly look to the private sector as “an untapped pool of capital,” in the face of shrinking public funding.

Most universities haven’t figured out how to talk to industry, but he predicted that if the new model is successful, others will be fast to follow in the U of M’s footsteps.

Mandel credits the U for taking the first steps, noting “a lot of excitement” among the med tech and life science companies in his membership. He also observed that the U of M’s historic role of close collaboration with industry was instrumental in the creation of the medical device industry here.

The amount of research funding awarded to the U (but not necessarily spent in 2011) totaled $769 million, down $57 million from last year because of declines in federal stimulus funding. Only about 22 percent of total research funding came from private sources that in the future potentially would fall under the new MN-IP guidelines.

In 2011, $46.4 million of research awards came from business and industry sources and $119.1 million from other private sources. The remaining funding sources are primarily federal programs, such as the National Institutes of Health, ($305.3 million), the National Science Foundation ($82.5 million) and the Department of Agriculture ($38.9 million). 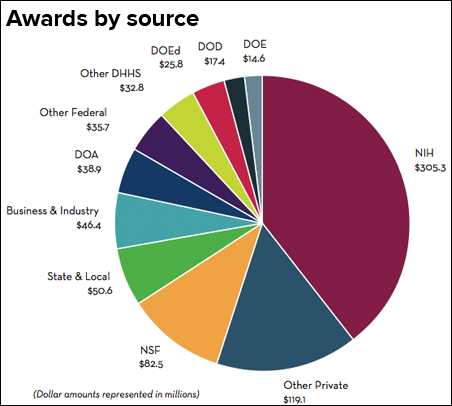