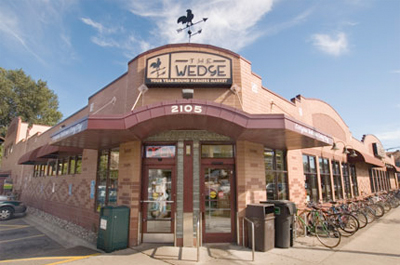 Elizabeth Archerd first heard the doomsday predictions shortly after she began working at the Wedge, the south Minneapolis food cooperative.

“I started here in 1981, and I’ve been hearing about the impending death of co-ops since about 1982,” laughed Archerd, the Wedge’s membership and marketing coordinator. “First it was the mainstream grocery stories adding natural products – that was going to kill us.

“Then Whole Foods came in, and that was going to be the death of co-ops. All it did was increase interest and awareness.”

The Wedge, which got its start in 1974 in the basement of an apartment building on Franklin Avenue, now has more than 15,000 members. The Lyndale Avenue store and its warehouse operation took in about $44 million last year, an increase of 7 percent over the previous year. The Wedge is one of 12 co-ops in the greater Twin Cities area – a group that continues to thrive even in the face of greatly increased competition in the grocery business over the last decade.

Archerd said the Wedge has been able to remain profitable even as it’s increased its community giving. The co-op’s major community giving program, WedgeShare, last year gave grants totaling more than $70,000 to groups focused on sustainable living. The store also returned more than $1 million in patronage refunds to its members.

Archerd says the Wedge doesn’t worry about increased competition from such new grocery players as Trader Joe’s and Target.

“We didn’t start as marketing entities,” she said. “We were started by people who were not getting what they wanted from the business markets. So we’ve been listening to our customers from Day One, because our customers started us. We come up from our communities, and we grew with our communities.

“We call some of those other stores a gateway drug,” Archerd said. “Start at these other stores. When you’re ready for the real thing, come to the co-op.”

Despite doomsday predictions, the Wedge food co-op is still thriving