Minnesota has restored more than half of the jobs it lost during the recession, but a recovery is coming more slowly to Minneapolis-St. Paul International Airport.

The number of passengers who used the airport last year increased by only 1.3 percent, according to a new report by the Metropolitan Airports Commission (MAC).

Air travel often serves as a good proxy for measuring economic health because it’s a reflection of business and consumer activity and confidence. But the tepid increase in travelers for 2011 might be most closely linked to the fare hikes that occurred along with a rapid rise in crude oil prices.

The health of the airport and service trends at MSP are spelled out in the report that recently was submitted to key Minnesota legislative leaders.

Southwest Airlines, the nation’s biggest low-fare airline, has become the second-largest carrier in the Twin Cities. Texas-based Southwest bypassed United Airlines and American Airlines during 2011 and finished the year with a 3.81 percent market share. 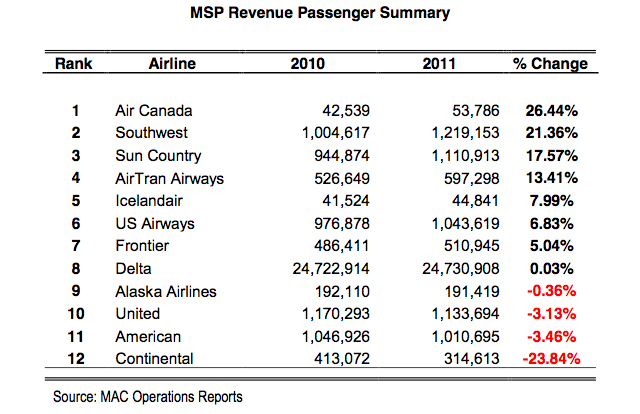 But Delta lost a point of market share in 2011, dropping to 77.38 percent of passengers transported. That’s because other carriers were growing here.

Southwest, which flies to Chicago Midway, Denver, St. Louis and Phoenix, carried 1.2 million passengers in and out of MSP last year.

Southwest’s passenger numbers grew by 21 percent in 2011, which is how it leapfrogged into the No. 2 spot in the market.

Sun Country Airlines, based in Mendota Heights, also saw double digit growth last year. It boosted its passenger numbers by 17.6 percent by transporting nearly 1,111,000 passengers. Sun Country, which has dubbed itself the hometown airline, is in fourth place with a 3.48 percent market share.

Critics of the MAC have railed about the need for more low-fare competition at Minneapolis-St. Paul International Airport. But the report to lawmakers shows that the low-fare carriers already here have been expanding while the big network carriers haven’t been growing. While Delta was treading water in the Twin Cities market in 2011, United and American experienced passenger declines in the 3 percent range.

Low-fare Air Tran Airways bumped its passenger total up by 13 percent in 2011, carrying nearly 600,000 passengers. Southwest and Air Tran are now in the process of merging.

Spirit Airlines, known for limited leg room and deeply discounted fares, will join the cadre of low-fare carriers at MSP. It will start operating flights to Chicago O’Hare and Las Vegas on May 31.

Frequent travelers are well aware that more regional jets have been flying out of Minneapolis-St. Paul International Airport, while the use of larger Airbus and Boeing planes has declined.

The MAC’s report documents the degree of that shift. During 2011, about 11 percent more passengers traveled on regional airline flights than they did in 2010. Meanwhile about 3 percent fewer passengers were onboard large mainline airplanes.

The number of regional aircraft departures and arrivals increased by 6.9 percent while the flights flown in large mainline planes dropped by 6.5 percent.

With the high price of fuel, the airlines are striving to perfectly match the size of an airplane with the passenger demand on a given route. US Airways will be using regional planes when it introduces Twin Cities service to Washington Reagan National Airport on July 11.

The three daily flights will be flown by Republic Airlines regional pilots and they’ll be operating 69-seat and 80-seat planes made by Embraer.