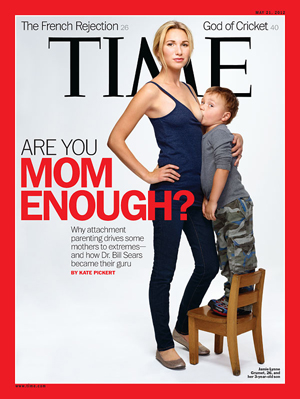 Time and Newsweek didn’t run open-casket photos of Whitney Houston on their covers, as the National Enquirer did when the singer died unexpectedly. But recent cover choices suggest that the nation’s weekly newsmagazines are edging closer to the kind of sensationalism that has always made the Enquirer stand out at the grocery store checkout line.

This week, Time is drawing cheers, jeers — and widespread attention — for a cover photo of a mother breastfeeding her 3-year-old son. Not to be outdone, Newsweek put a rainbow halo over the head of President Obama on the cover of its current issue. Last month, Newsweek ran a cover photo of a nude, blindfolded woman with the headline, “The Fantasy Life of Working Women.”

Even Bloomberg BusinessWeek got into the act with a February cover on the airline merger between Continental and United. “Let’s Get It On,” urged the headline over an illustration suggesting midair sexual congress between two jumbo jets.

The sensational covers are the newsweeklies’ attempt to recover some of the mojo taken from them by — what else — the Great Recession coupled with the maturing of the Internet.

Losses in the magazine business aren’t as severe as those suffered by newspapers, which have lost more than half their revenue since 2005. But they’re significant. Magazine ad revenue overall is down by about 12 percent since 2005, and the number of ad pages sold is down by about 36 percent.

And newsweeklies as a category are severely underperforming the industry. One longtime stalwart, U.S. News & World Report, quit print publication entirely in 2010 to focus attention on its thriving rankings business. Since 2005, ad revenue is down 42 percent at Time and 62 percent at Newsweek. By those standards, Bloomberg BusinessWeek’s decline of only 22 percent looks positively robust.

There’s no mystery about why the newsweeklies’ cover choices have gotten more provocative: “[To] get attention, of course,” Time’s design director, D.W. Pine, told WWD. The magazine business uses single-copy newsstand sales as an important barometer, even though they make up a tiny percentage of overall circulation.

Time, for example, sells about 77,000 copies on the newsstand each week — that’s only about 2 percent of its total circulation of 3.3 million.But subscriptions are often heavily promoted and discounted, and so the number of people who are moved to buy a magazine on the spot is seen as an indication of connection with readers. Time and Newsweek didn’t have information on how this week’s issues are moving on the newsstand.

What shocker will we see next? I’m waiting for the first appearance of genitals on a mainstream magazine cover. It can’t be far off.

THE END IS NEAR! Weekly newsmagazines flirt with sensationalism