Until a Missouri congressman caused a furor this week over abortion politics, it appeared that President Obama and GOP challenger Mitt Romney would use their campaigns to peddle their elixirs for jolting the stagnant U.S. economy.

While the fallout over U.S. Rep. Todd Akin’s rape and abortion comments spreads to the Republican National Convention, it’s still likely that the final weeks of the presidential race will focus on the economic insecurity felt by many Americans.

That’s why two veteran investigative journalists had perfect timing this summer with the publication of their book, “The Betrayal of the American Dream.”

Authors Donald Barlett and James Steele, who’ve been a reporting duo since 1971, are highly critical of wealthy individuals and big corporations that have tremendous influence in Washington. They contend monied interests have shaped public policy to their advantage and to the financial detriment of the middle class.

But whether one thinks the authors are rightly or wrongly engaged in class warfare, one cannot deny that it’s become tougher to achieve the American dream in 2012 than it was in earlier decades.

Working hard, playing by the rules and getting a college education are not necessarily paths to a good-paying job, home ownership and a decent retirement.

That reality was chronicled by the Pew Research Center in a report released Wednesday called “The Lost Decade of the Middle Class.”

Pew found the portion of Americans who are in the middle class dropped from 61 percent in 1971 to 51 percent in 2011. Over the past decade, Pew characterized the erosion of middle-class jobs as the “hollowing of the middle” in the United States.

Americans are suffering from persistently high unemployment, college student loan debt has reached staggering levels, and well-paying jobs are hard to come by.

Many Americans who have jobs will need to work past 65 because their 401 (k) accounts aren’t large enough to cover their basic needs in retirement. It is becoming increasingly rare for American workers to enjoy the security of defined-benefit pension plans, which used to be a mainstay for employees with long tenure at private companies.

Barlett and Steele spent considerable time interviewing people who are the economic casualties of the modern economy. 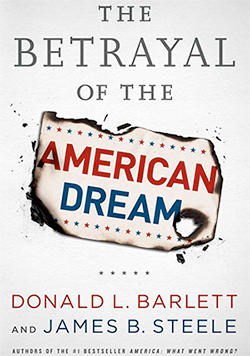 They concluded: “Most of the changes essential to restoring the American middle class require congressional support, but Congress has largely been on a thirty-year holiday from economic reality — at least as far as the middle class is concerned.”

Barlett and Steele, who built their careers at the Philadelphia Inquirer and later worked for TIME magazine and Vanity Fair, are particularly disturbed that American society seems to be “built on the economic principle that the lowest price [product] is all that matters.” They are more concerned about Americans earning a living wage.

They argue that middle-class Americans must exercise the power they have by bothering to vote in key elections. They wrote that those middle-class voters “must put their own economic survival above partisan loyalties” and learn where the candidates stand on four major issues.

Their four bedrock questions are:

1. Will you support tax reform that restores fairness to personal and corporate tax rates?

2. Will you support U.S. manufacturing and other sectors of the economy by working for a more balanced trade policy?

3. Will you support government investment in essential infrastructure that helps business and creates jobs?

4. Will you help keep the benefits of U.S. innovation within the United States and work to prevent those benefits from being outsourced?

Citizens will get the chance to pose these and other questions at a town hall forum presidential debate on Oct. 16. The Commission on Presidential Debates recently announced that the people who get to take part in that session will be undecided voters chosen by the Gallup polling organization.

CNN reporter and anchor Candy Crowley will dig deeper on the critical economic topics on Oct. 16 as she moderates the presidential debate at Hofstra University.

There will be only one other opportunity to see Obama and former Gov. Romney face off on economic recovery, which is the defining issue of the campaign. PBS host Jim Lehrer will moderate the Oct. 3 debate on domestic issues.

The final debate before the election, scheduled for Oct. 22, will focus exclusively on foreign policy.

In theory, these middle-class woes should serve to stimulate voter turnout in November.

In the 2008 presidential election, Minnesota had the highest voter turnout at 77.8 percent. Tragically, only 61.6 percent of eligible American voters took the time to cast ballots.

The world truly is run by those who show up, and this year Barlett and Steele are hoping that middle-class voters flex their muscles at the polls rather than shrugging their shoulders in disgust and standing on the sidelines.

New book probes the unraveling of the American dream