This article was  produced in partnership with students at the University of Minnesota School of Journalism and Mass Communication and is one in a series of occasional articles funded by a grant from the Northwest Area Foundation.

George Vognar trusted the promise of reverse mortgages: They would allow senior citizens to stay in their homes while also living on part of the equity.

Only after Vognar locked into the mortgage on his St. Paul home, did he learn that the bank wouldn’t include his wife, Christine Midelfort, in the deal when she reached the eligible age of 62. Now, if George dies before her, she stands to lose the English-cottage style house where they have lived since 1989 and reared two daughters.

“We trusted people,” he said. “That was our problem with the reverse mortgage.”

Vognar turned to the state Attorney General’s office where at least 100 Minnesotans have complained since 2008 about misrepresentations, aggressive marketing and excessive fees connected with these mortgages.

Some senior citizens said they were pressured into mortgaging their homes in order to buy gold coins, annuities and other questionable investments. Some said they were double billed for government-required counseling and then hounded to pay the excess charges.

Collectively, the complaints outline a problem that is poised to grow dramatically as some 32 million home-owning Baby Boomers seek means to stretch their retirement dollars. Anticipating the impending problem, the Minnesota Legislature passed a bill in 2009 that would have imposed stricter rules on reverse mortgage lenders. Then Gov. Tim Pawlenty vetoed it.

Too many gone bad

Reverse mortgages enable some seniors to live out a more comfortable retirement. But too many of these deals have gone bad, with seniors in foreclosure and their loved ones homeless. And too many shady dealers have turned loans that were intended to help seniors into instruments for preying on them instead.

“We are now seeing some of the same brokers whose activity resulted in the subprime mortgage lending fiasco start to sell reverse mortgages as a way to make up for the meltdown in the regular housing market,” Attorney General Lori Swanson said in a letter to Vognar.

In a regular mortgage, you borrow money to buy a home, and you immediately begin to pay the loan back through regular payments to the lender. A reverse mortgage is different. Essentially, you convert the equity in your home into cash without having to meet any income qualifications or even prove you are credit-worthy. You can take the equity as a lump sum, an income stream or a line of credit to help pay major expenses.

Because there are no required mortgage payments on a reverse mortgage, the interest is added to the loan balance each month. The loan balance eventually can grow to exceed the value of the home, particularly during times of declining home market values. But the borrower is not required to make up that difference.

Borrowers do not necessarily live payment-free, however. They still are responsible for property taxes and insurance on the home.  Further, when a borrower dies or moves away – say, into a nursing home for an extended time — his or her heirs must repay the mortgage or forfeit the home.

The allure is obvious, and it is easy to see why this type of lending has grown nationwide into a $20 billion industry involving more than 740,000 mortgages.

The rub for Vognar and for many other couples came with the fact that borrowers must be at least 62 years old to qualify for a federally insured reverse mortgage.

Vognar was 71 back in 2008 when he started looking into reverse mortgages. He was getting ready to retire from his work as a psychotherapist. Midelfort planned to continue her part-time work teaching Norwegian language and translating.

With Social Security and savings added to her income, they could cover expenses, but it would be tight. Retired life would be much easier if they could erase their mortgage payments of some $14,000 a year.

Hoping their ticket to that easier life could be a reverse mortgage, they worked the numbers and realized they were sitting on enough equity to cover the mortgage payments.

But there was a catch. At age 58, Midelfort was too young to qualify for the mortgage. The deal would have to be done in Vognar’s name alone, they were told at the offices of Wells Fargo Home Mortgage. In other words, her name would come off the title.

‘I was really scared’

Here’s what happened next, according to a complaint Vognar filed with the Minnesota Department of Commerce and the Minnesota Attorney General’s office: The couple was referred to a reverse mortgage specialist at a Wells Fargo office in Coon Rapids.

“We met with this woman and discussed our concerns for over an hour,” Vognar said in the complaint. “She assured us repeatedly that my wife could be put on the mortgage when she reached the age of 62.”

That didn’t prove to be the case.

In written responses to inquiries from Vogner and Attorney General Swanson, Wells Fargo Home Mortgage specialists in Des Moines said, “please be advised, WFHM is unable to confirm or deny conversations that occurred at the time of origination.”

In another letter, Wells Fargo told Vogner: “In order to add a borrower to an existing loan, you would be required to refinance the loan. However, effective June 30, 2011, Wells Fargo Bank, N.S. discontinued accepting new applications for reverse mortgage loans.”

The couple could start from scratch by seeking a new lender from the National Reverse Mortgage Lenders Association, Wells Fargo said.

But that’s not a real option, Midelfort said. The recent downward spiral in home values coupled with closing costs and the accumulated interest on the original reverse mortgage left them with no equity to bring to the reverse mortgage market.

In other words, Midelfort stands to lose her home if her husband dies before her or goes into a nursing home or assisted living center for longer than a year. 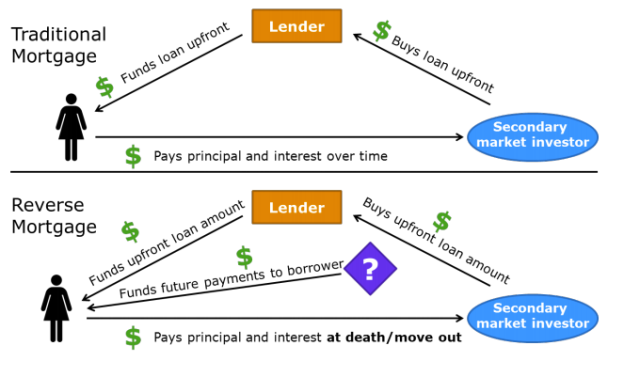 In 2009, the Minnesota Legislature moved to tighten rules for reverse mortgages with a bill that was intended to protect senior citizens who had been made especially vulnerable during the unfolding economic crisis, said Rep. Jim Davnie, DFL-Minneapolis, chief author of the House version of the bill.

Reverse mortgages from private lenders “are being aggressively marketed, are increasingly complex, sold as investment vehicles, and coupled with a growing demand from Wall Street for these products for the securitization market,” Davnie said at a hearing on the bill.

The bill would have extended regulations on federally insured reverse mortgages to all reverse mortgages in Minnesota, Assistant Attorney General Carla Heyl said at the hearing.  It also would have extended the time during which a senior could back out of a deal, further limited cross-selling of items like annuities and stepped up counseling to inform borrowers of other options for meeting their needs.

The bill drew support from senior citizen and consumer groups, including the local AARP chapter.

“We are pleased that the bill increases the responsibility of lenders, so that the originator and buyer of the loan can both…be held responsible for any unscrupulous actions,” said Shirley Hunt Alexander, testifying on behalf of AARP.

AARP supports reverse mortgages, which deplete a home’s equity, only as a last resort, Alexander said.

But the bill also drew strong opposition at the hearing.

“We’re worried that, as drafted, [certain] provisions may make it difficult if not impossible to actually sell these reverse mortgages,” said Matthew Lemke, testifying on behalf of the Mortgage Bankers Association.

Beth Paterson, who said she had 10 years of experience providing seniors with reverse mortgages, echoed that concern. She had worked as an executive for reverse-mortgage companies and also written books advising consumers about the product.

“Reverse mortgages have made a huge difference in my clients’ lives,” Paterson said. “It’s allowed them to retire. . . . It’s helped them pay medical bills, or prescriptions. . . . I can’t tell you how many people we pull out of foreclosure with our reverse mortgage.”

The bill was amended to address concerns from the mortgage industry, and it passed the House and Senate by wide margins. But then-Gov. Pawlenty vetoed it.

Since then, legislators who are interested in mortgage problems have focused on the flood of foreclosures that hit their districts during the Great Recession.

“I’m so involved with foreclosures because my district is one of the hardest hit in the country,” said Rep. Joe Mullery, a DFLer who has introduced several mortgage-related bills this session in a bid to stabilize his North Minneapolis district.

Mullery said he’s considering reverse-mortgage legislation that would not reflect the 2009 bill but instead would guard Minnesota seniors against a problem that has surfaced in other states. The problem, Mullery said, is that creditors who have won court judgments against some reverse-mortgage holders have been able to seize the income from the mortgages.

“Let’s say I’m 70 and I have very little income so I do a reverse mortgage under which the bank pays me so much a month,” he said. “Now, let’s say I’m driving down the road, an accident happens and I don’t have enough insurance to cover all of the damages . . . so they get a judgment against me.”

As the law stands now, the holder of the judgment could take the monthly payments on the reverse mortgage even though the home could not have been seized had there been no reverse mortgage, Mullery said.

“So I’ve given up the equity in my home and now I can’t get the monthly payments I need to live on,” he said.

Younger and deeper in debt

There is no question that reverse mortgages could help certain retirees live more comfortably by tapping their equity. Half of American homeowners age 62 and older held more than 55 percent of their net worth in home equity in 2009, according to a report published last year by the U.S. Consumer Financial Protection Bureau.

Recently, retirees have been turning to reverse mortgages at substantially younger ages than in the past. They are struggling with more debt, and they are more likely to take the reverse mortgage as a lump sum rather than an income stream.

While most seniors find other ways to stretch retirement dollars, the minority who do turn to reverse mortgages should do so with caution, the Bureau’s report stressed. Among other findings, it said:

A bit of a bulldog

Like Vognar and Midelfort, couples often aren’t aware that the younger spouse may lose the home because he or she was not old enough to be listed as co-borrowers at the time of closing, the report said.

“If the borrowing spouse dies or needs to move, the non-borrowing spouse must sell the home or otherwise pay off the reverse mortgage at that time,” it said. In fact, there have been cases in which other family members such as children and grandchildren also were left homeless.

For Vognar and Midelfort, the house they mortgaged was more than a beloved home. It also was part of her long-term retirement strategy. Should he die first, they had planned, she could boost her income by renting out a small apartment that is built into the house. Now, she stands to lose that security too.

They haven’t given up their plan, though. On the advice of the Attorney General’s office, Vognar has asked a legal aid service for veterans to help him line up a private attorney.

“He is a bit of a bulldog, so he is going to stick with this,” Midelfort said. “We don’t know if there is anything we can do about it, but we sure will find out.”

Kevin Burbach is an intern at MinnPost and a journalism student at the University of Minnesota.