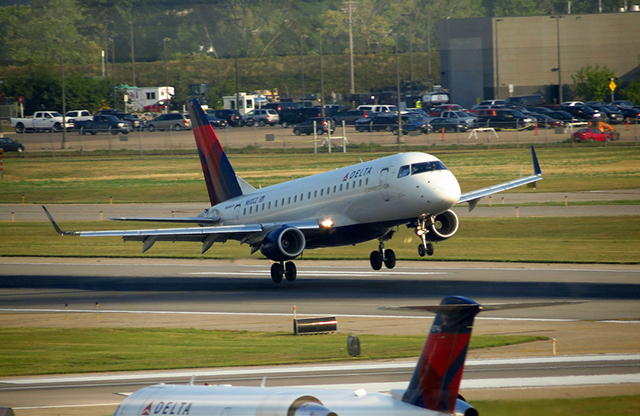 Creative Commons/redlegsfan21Delta, the dominant carrier in the Twin Cities market, competes with Southwest on ticket prices on nonstop routes.

The U.S. Justice Department is attempting to block a merger of US Airways and American Airlines because of worries that fares would rise with fewer big airlines.

In the Twin Cities, there’s actually been an increase in low-fare competition since Delta Air Lines acquired Eagan-based Northwest Airlines.

There’s been so much growth in low-fare flights that the Metropolitan Airports Commission (MAC) this fall will consider adding gates for low-fare carriers.

In 2011, Southwest acquired low-fare carrier, AirTran Airways, which is operating four daily nonstops out of the Twin Cities to Orlando and Atlanta, which is where Delta is headquartered.

Delta, the dominant carrier in the Twin Cities market, competes with Southwest on ticket prices on nonstop routes.

In 2012, about three out of four passengers on Minneapolis-St. Paul International Airport flights were traveling on Delta mainline or regional planes.

While competition on a route helps to hold down fares, the price of oil is a huge determinant of ticket prices. Delta and Southwest are both setting ticket prices so they can pay their fuel bills, cover their labor and other operating costs and turn a respectable profit.

When Northwest was an aggressive carrier based in the Twin Cities, some travelers grew frustrated because Northwest would lower its prices in response to new low-fare service. Many travelers would stick with Northwest flights and collect their frequent flier miles, which resulted in some low-fare competitors dropping Twin Cities’ flights because they couldn’t attract enough traffic.

Yet, in the aftermath of the Delta-Northwest merger, Southwest has built a healthy foothold at Minneapolis-St. Paul International Airport. It transported 1.28 million passengers in and out of the Twin Cities last year, making it the second-largest carrier in the market.

Southwest and Sun Country both operate out of the Humphrey Terminal, or Terminal 2, in the Twin Cities.

So does ultra low-fare carrier Spirit Airlines, which has a low base fare and charges customers numerous fees, including a fee for carry-on bags. Spirit initiated service in the Twin Cities last year, and this month announced four new seasonal destinations in the cold-weather months. Beginning in November, it will add daily nonstop service to Los Angeles, Orlando, Phoenix and Tampa.

The Metropolitan Airports Commission, which operates the airport, has welcomed the increased low-fare flights at Terminal 2’s 10 gates.

“The terminal has experienced double-digit increases in passenger volume and flight levels for the past few years, thanks to the entrance and expansion of Southwest and Spirit Airlines and the growth of Sun Country Airlines,” said MAC spokesman Patrick Hogan.

Spirit, which has ordered new Airbus single-aisle planes, also indicated that gate constraints could inhibit its expansion in the Twin Cities, Hogan said.

The airport’s long-term comprehensive plan calls for major expansion of the facilities at Terminal 2. The plan is designed to increase gate capacity as passenger demand warrants it.

“Currently, we have not set a timeline or identified a funding source for constructing additional gates at Terminal 2,” Hogan said. “However, in light of continued expansion at that terminal, we are currently exploring alternatives for ensuring adequate gates are available for growth in competitive air service as well as funding options for associated capital costs.”

The MAC staff intends to present gate expansion options to the commission this fall.