Slender and soft-spoken, David Duckler doesn’t look like a spy. And he’s probably not. But it was a boost from the CIA that started him on the path to opening a tea house in the Seward neighborhood of Minneapolis.

Duckler, 26, traveled to China as a college student to study the language. While there, he became entranced with tea, its culture and its agriculture. After graduation, he applied for and got a grant from the spy agency to study and report on the folklore of tea in China.

When he and his wife, Lily, returned to the States, they started holding tea tastings. Then, using Lily’s $1,200 tax refund, they started an online tea sales business in 2010 supplied by small farmers they’d met in China.

Now the couple has opened Verdant Tea Tasting Room and Tea Bar in the East Franklin Avenue building that once housed the Seward Co-op.

They’re in the forefront of what they believe is the next big thing in specialty beverages. There are more than 25,000 coffeehouses in the United States, and it seems that every week brings news of a new craft brewery in the Twin Cities. But there are only a couple hundred tea houses in the country, at most — even tea industry trade groups seem to have no precise count. 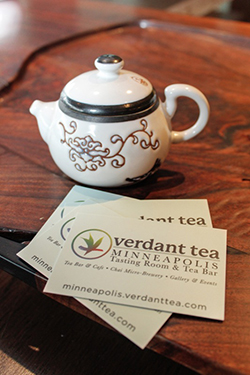 Yet the Ducklers say they’re not motivated to make a killing in business. Instead, they hope to bring the lifestyle experience of tea to harried Americans.

“China is this energetic, changing place,” David Duckler said. “But you go into the tea shop and it’s calm. You sit for an hour and drink tea as an experience. The idea is for everyone to be comfortable.”

They buy only from the small farmers they personally know — in some cases, that means buying a farmer’s entire crop. Each season, each picking — even each pot — is different, they say, and they enjoy sharing their knowledge of the ancient beverage.

“The approach is respecting flavor and engaging people,” David Duckler said. “The era of tea as a commodity is ending. It’s not going to supplant coffee, but it can appeal to the same sensibilities as coffee and craft beer.”

Or, as Lily Duckler puts it: “Everything is a different gateway to happiness.”