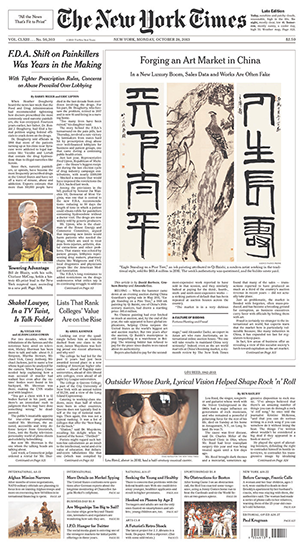 It’s been several months since I’ve written a doom-and-gloom column about the newspaper business. But there’s always plenty of gloom to go around, so here we go again.

Newspapers are a business in which the best thing a company can say to investors is that it’s not losing money quite as fast as it did a couple of years ago. Print advertising, which still brings in 60 to 80 percent of the revenue at most newspapers, continues to drop with no end in sight. As a whole, the newspaper business is bringing in less than half the money it did in 2005, its historic high-water mark.

What’s more worrisome to me are trends in digital advertising. Newspapers have been counting on digital growth to save them. But after increasing rapidly over the last few years (albeit from a very small base), sales of digital ads have slowed dramatically.

You’d expect that if anyone could successfully sell digital advertising, it would be the New York Times, with its international audience of sophisticated, affluent readers. Yet digital advertising at the Times actually lost ground in the first six months of this year, falling 3.3 percent. (Print ads were down 10 percent in the same period.)

At McClatchy, the former owner of the Star Tribune, print ads fell 9.2 percent over the first nine months of the year, while digital ads grew only 0.8 percent. That paltry digital growth includes McClatchy’s ownership shares of the successful national ad portals CareerBuilder.com, Cars.com and Apartments.com. Digital sales at the company’s 30 newspapers were undoubtedly down.

McClatchy responded by announcing a companywide pay freeze for 2014. (That presumably includes CEO Pat Talamantes, who was paid more than $1.6 million in 2012.)

Although newspaper layoffs aren’t at the levels of the bloodbaths of 2008-09, job cuts have continued. Rick Edmonds of the Poynter Institute, a journalism think tank, points out that Gannett recently cut nearly 450 jobs and the Chicago Sun-Times eliminated its entire photo department. Respected newspapers imposing recent layoffs include the Cleveland Plain Dealer, Denver Post, the (Portland) Oregonian and Providence (R.I.) Journal.

Newspapers are selling their buildings to raise cash and cut costs. The Star Tribune’s best hope for long-term survival may lie in the imminent sale of its downtown land for new development related to the Vikings stadium.

I still miss being a newspaper reporter. But I think I sleep better at night knowing that my livelihood isn’t tied to a business that hasn’t seen a year of positive growth in almost a decade.