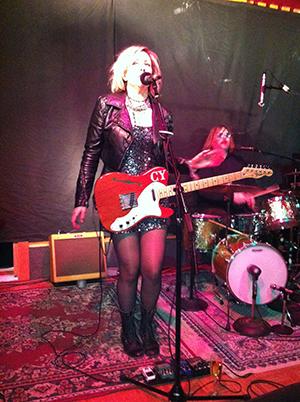 Whenever Courtney Yasmineh has lost herself, she’s found herself again in music. She did it as a 17-year-old, running away from a disastrous home life in Chicago and playing the bar circuit on the Iron Range while living alone in a remote cabin near Tower.

Ten years ago, she left her life as a doctor’s wife and suburban mother of three to get back into the music business at an age when many are looking to wind down, not rev up.

And after four albums and a decade working the music scene in Minnesota, Europe and elsewhere, she’s getting a shot at a career-making gig at South by Southwest next month in Austin, Texas. Cutting ties with the last vestiges of her former existence, she’s selling her house to buy a van to travel in with her four-piece band.

“I believe I’m doing my penance by giving up every idea I had of comfort and the trappings that go with it,” Yasmineh said. She declines to give her age, but it’s safe to say that she’s old enough to be the mother of many of the musicians who’ll be playing in Austin.

During the years she wasn’t performing, “I’d go to concerts and see the person onstage, and I’d be tortured. I’d think, ‘You’re supposed to be doing that.’ ”

The terrorist attacks of Sept. 11, 2001, spurred her re-entry into music. After the events of 9/11, she was moved to write a song. She brought it to her church and adapted it for a choir performance.

“Everyone said, ‘Why aren’t you doing more with this?’ ” Yasmineh recalled. The rebirth of her musical ambition coincided with the birth of social media, which plays a crucial role in the career of any independent musician today.

“Social media came along when I came along,” Yasmineh said. “I got to reinvent myself and say, ‘Here I am.’ ” She uses her website to promote herself; music bloggers have played a key role in helping her get noticed.

The music business has changed in recent years. Record labels used to maintain a large roster of artists; now, Genadek said, “They have a handful of acts they’re trying to push into superstardom.” Without support from a label and its resources, indie rockers have to manage their own careers, get their own bookings, find their own audience. Yasmineh doesn’t worry.

“If you’re doing something meaningful, people are willing to be supportive,” she said. “This is the first time I’ve ever been happy in my whole life.”